Our introduction to Thailand was atrocious…the first impressions were that of money hungry, gouging prices. We went in with our eyes open and were expecting it to be more expensive than the places we had recently been…but this took things to another level. To use an ATM here…any ATM…you must pay between 150 and 180 baht to withdraw funds. This is between $6-8 to get your own money out…further to this they limit withdrawal sizes…so that you must pay this fee over and over.

We arrived at the Bangkok airport (not the main one) at lunchtime and had a 3 hour layover until we could fly on to Phuket. We cruised the food options to be shocked at the prices…a subway sub was over $13 (once converted), a McDonald’s meal was well over $10 as was Burger King, a latte was $9. Now I accept that airport prices almost everywhere are high…but these prices are almost double the Australian prices…and as we all know Australia is expensive. We settled on 2 Burger King whoppers and we shared a large fries and a coke for $26 Australian.

We thought that after 14 months away a 2 week break by the beach in Thailand was the perfect way to wind down before returning back to Australia. The beach time may have been awesome…but Thailand…at least Phuket…was not it. This place is the pits. Having been through the last few countries…any one of these would have been a much better choice than coming here to Phuket. 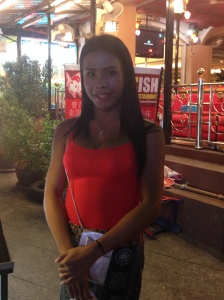 Thailand is the home of the girlie-boy…officially titled the Kathoey…they are much more visible and more accepted in Thailand than the transgender or transsexual communities in Western countries. As Thais generally believe in Karma they tend to believe that being a kathoey is the result of transgressions in past lives, therefore kathoey deserve pity rather than blame. They are everywhere…you can see them working in shops, movie theatres and clothing stores…but mostly you see them working at massage joints. And mostly they are grabbing tourists offering massages with happy endings.

We settled in to an ok hotel in the middle of the tourist area near Patong beach. This is the most famous beach resort on Phuket and is tourism hell. Thousands of foreigners (mostly Russians and Aussies), bars, restaurants, touts, trinket shops, tourist shops, tailors and massage joints. Add to this the constant cacophony created by people touting for tuk tuks, massages, the nightly Muay Thai martial arts bouts or the Ping pong shows and this place sucks. 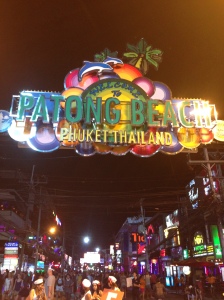 The main tourist strip is Soi Bangla or Bangla road. This is about a 500 metre long street running between the beach and the main shopping centre Jungceylon. The street is lined with bars that double as strip joints and knock shops. The road gets blocked off every evening at 6pm and the fun begins. Hookers spill out along the street, shake their asses (poorly) on poles, and sidle up to drunk, sunburnt tourists who are too under the weather to notice that 70% of the girls are blokes.

The prices reduced from the initial shock of the airport but are still about 400% higher than each of Thailand’s immediate neighbours. Jill, Cathy, Brett and I all went searching every evening on the hunt for the various culinary delights that were on offer…and there is a lot on offer. While the nightlife is scary the food scene certainly is not. We did find some incredibly good meals…but we also paid a lot of money for them.

The beach was nice…sort of…it is kinda tough to get excited about foreign beaches when you grow up in Australia. The last time I went to Hawaii I complained about crappy beaches…the beaches here are much nicer…but the water is dead flat so there is nothing surf related. As I mentioned earlier the main groups here in Phuket are Aussies and Russians. The Aussies that come tend to fit 2 categories…parents with kids… Or single blokes looking for the nightclubs, hookers, bar girls and the rub and tugs on offer everywhere. 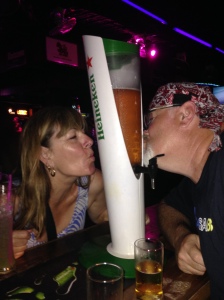 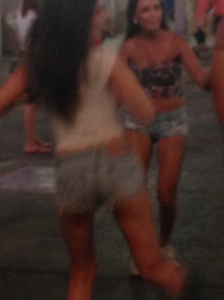 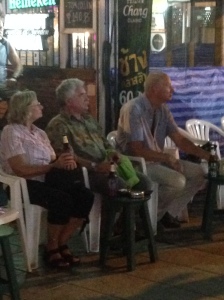 One of the more amusing aspects is the oldies…they are to afraid to get amongst the action on Bangla Road so they take up position on the opposite side of the road and just watch the goings on. We stopped in at the tailors and got a cashmere wool suit made up each…we figured that upon our return we would have to be grownups and get jobs and things. And this would mean job interviews etc…Yucko. 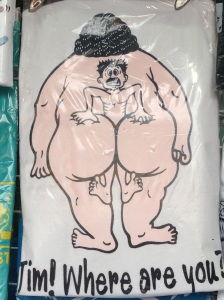 While here…I found the perfect shirt for my father in law but my wife overruled its purchase for fear that we may offend my mother in law. Anyway…sorry Jim…no shirt for you.

This post is well overdue for a number of reasons. reason number one is that it was written and cued on my Ipad…which died upon arrival back in Australia. This means that all of the witty quips and the contemporaneous comments are missing as I try and wrack my brain about what actually took place three weeks ago. Number two is obviously that we are at home now and have been immersed in the “real world” and have as such been busy.

The first thing that must be done is to add a minor amendment to the Phuket post. While we were in Phuket…we were staying at Patpong Beach which is the main tourist area…and it sucked…a lot. During our time there we made two forays to Phuket old town and they were both fantastic. The first time was on a weekend and we did the 17km tuk tuk ride to go and see the market. Now this place is a food lover’s heaven. Immediately we were overwhelmed with awesome food choices at incredibly reasonable prices.

While Thailand is generally considered cheap when compared to Australia, it is highly priced compared against most of Asia…and the tourist zones are comparable to Australian prices for most things (especially food and beers). The old town however was not. It was cheap, hectic, loud and fun. We ate, drank, cruised the rubbish tourist market stalls and generally had a ball…and paid more for the transport to get us to and fro.

Three days later we went back to try again, but a scheduling mixup meant the market wasn’t on so we wandered the streets. This time we paid about a dollar to catch the local bus there rather than the $16 that the tuk tuk drivers charged. It was hot so we stopped in for a refreshing beverage and immediately noticed the difference between this and where we were staying. Cocktails were $3-4 and beers were about $2 and the girl serving was both lovely and efficient…and a girl for that matter.

Upon ordering our second round she apologised that happy hour had kicked in and that alas our first round of drinks would be charged at the full rate of $2 per 600ml stubbie rather than the now discounted rate. As the sun set she directed us to the local street food stall area where we could get good local food. After a short walk we found this and settled in for an absolute feast. We just kept ordering from various stalls and eating and despite 5 attempts to get a bill from my little street vendor… the lady just kept saying “when you finish”. An hour or two later, the 4 of us were completely stuffed and I sheepishly headed for the bill.

As it turned out we were paying about $1 a plate for some of the most amazing food that we had eaten in Thailand thus far. In essence the entire meal for 4 of us in Phuket old town was about that which we would pay per head where we were staying. I guess the main point to be made in all of this is that Phuket does not actually suck…just the tourist beach areas do. If we had our time over again we would stay in Phuket old town and do the day trips to the beach. Had we done this we would have had a much better and cheaper time.

Upon arrival in Bangkok, we headed almost straight to Chinatown for dinner. Wandering the streets we found kerbside restaurants and market stalls that just could not be overlooked or bypassed. From here and on the recommendation of KAT (who spent much time living in Bangkok) we headed out to what he described was his favourite bar in BKK… Wongs Place. We arrived at about 9:30pm to find it still shut so we found another venue which charged us $10 for a little beer while we waited. At 10:30pm we returned to find it still not open so I grabbed some 600ml beer from the 7-11 (for $2) and we settled in for a foot massage across the road.

When it opened we entered this dark dingy little room with the walls lined with photographs of patrons from yesteryear. Our advice was to help yourself to the beer at the back in the fridge and they would just count up the empties at the end of the night. Alas the owner was not there to be able to pass on KAT’s regards and the beer prices had more than doubled to a ridiculous $4 for a beer. A hunt around the walls found some historical gems of photos that had to be captured and shared for posterity. 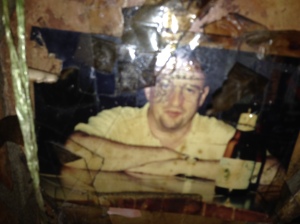 Day 2 in BKK was the inevitable shopping expedition during the day, hitting the infamous MBK shopping centre which thankfully was a short walk from our accommodation. Add to this the late night show at Patpong Night Market and we effectively did the normal tourist run through BKK. For those that do not know…Patpong night market is where all the sleazy side of Thailand resides. So as we wandered the streets were met with the usual touts offering us the girlie shows including the firing of ping pong balls and darts from various parts of the anatomy and the offers of some unique forms of entertainment.

While cruising around we stopped into one of the venues for a beer and use of the toilets. There were girls “dancing” on stage where in actual fact they were leaning against the poles holding the roof up. The entertainment was so poor that we started to watch the fish tank as the fish were both better looking and more active than the girls on stage. This was fine for a while but eventually we had to leave when Jill (justifiably) tried to slip a tip into the fish tank thus offending the owner and the girls. 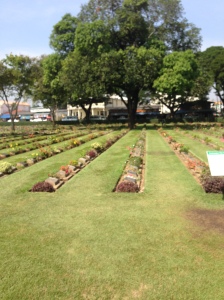 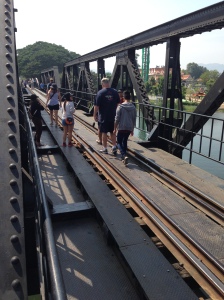 The next day we were joined by long term friends of Brett’s (Annette and Peter) and we did the day trip out to the Bridge over the River Quai via the floating markets. This is quite a way out of town and for most people other than military buffs or veterans is probably not worth the time or expense to get there. I came here in about 1995 with my mate Nadim and the floating markets were quite the sight…today they are just filled with the same tourist trash you get everywhere else but at a greater price than elsewhere.

We took the long boat to the market which was a zig zag through the canals to get to the market…in reality we could drive right up to them and save 40 mins. It was once authentic…now it is a farce. The cemetery was interesting but the museum was a bunch of reproduction photos with little or no explanation…an hour of googling and a printer could get you the same result. In hindsight this trip was overpriced and really not worth the effort.

Our last day was spent at shopping centres eating, drinking and having overpriced coffee while we waited for our late night flights.