Well if first impressions count…I am going to hate this place.

The traffic was horrendous. And this coming from two people who spent so much time in Asia. I have not seen traffic so bad in a very long time. The volume of cars was high, the honking and beeping was constant and the fact that lane markings were not even considered made this place a hellhole…and that was just getting from the airport. We turned right from the left hand lane, across 3 normal but 5 actual lanes of traffic, at speed. It was certainly a white knuckle ride and we both decided that perhaps it was better if we just didn’t look.

After a nap (early morning flights and another 2hr time zone change) we headed out for a late afternoon stroll and a bite. While the traffic remained devilish there was some semblance of order to it…but not enough to trust. We wandered along the park in front of our hotel towards the centre of town 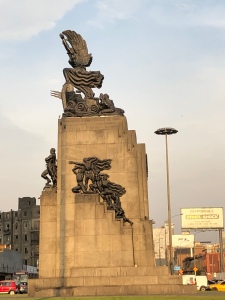 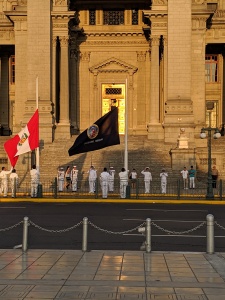 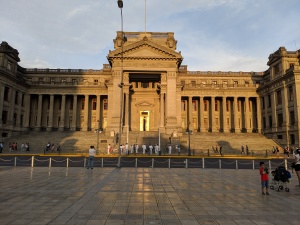 We came across a seafood restaurant that we had seen during our “what is nearby” searching that has become commonplace when we hit a new city…so we gave it a try. And wow…we picked well. The early bit was just basically bar snacks, corn kernels (concha) plantain chips and a mayo and a salsa type dip. All incredibly salty but perfect for ordering more cerveza (beer).

Then came the entrees…mine was (tequenos) a South American version of a wonton, usually made with cheese but this one replaced the cheese with crab, deep fried with an incredible dipping sauce…but despite this, Jill was the clear winner…she got some Panko covered prawns that were set on a tube of polenta, slathered in crab meat, with a sauce that I cannot describe and of course the obligatory cerviche (this one did not have “ass weed” (coriander/cilantro) on it). Then came two seafood skewers set on a bed of tiny potatoes and mushrooms. All this for under $40.

The next day we set off on the walking tour from the hotel. It was atrocious…the guide basically said “hello friends, follow me” and began to walk past everything that looks interesting (without a word)… about 2 kilometres later in the main square he handed us off to another guide and was never seen again. Despite his indifference, the city sights were good and my opinion of Lima softened once again. 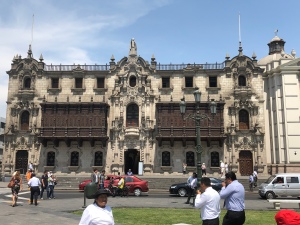 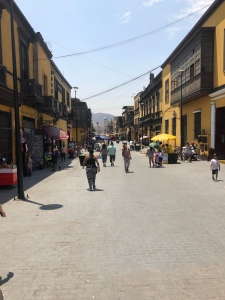 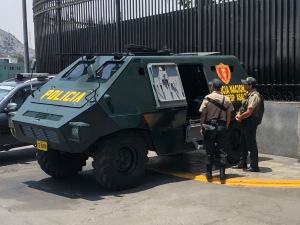 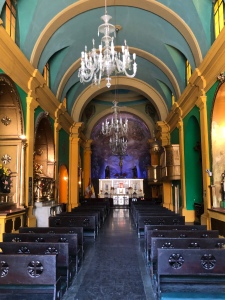 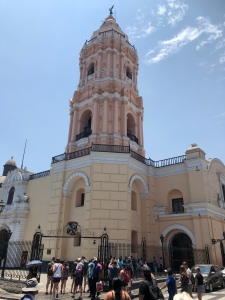 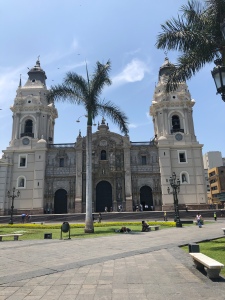 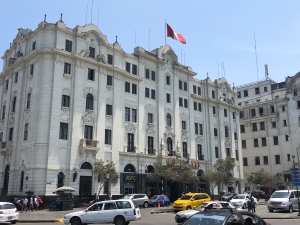 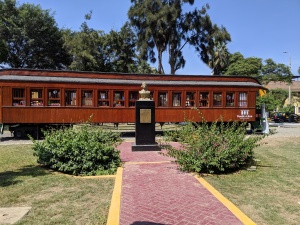 The piece that I really want to do is the street food. I have heard so much about it and have coveted it as I walked past it, but am yet to dip my toe in the water. Hopefully, today will be the day. The key they tell me to Peruvian street food is that it must be 3B

I did, as it happens, get to try some street food from two of the many carts around but was mainly foiled by my wife who NEEDED to sit down to eat like a civilised person. And after one of the generous servings (generally with change from a $20) the need to eat any more is both unnecessary and virtually impossible.

So today became a day all about culture. We went to two museums the National Museum of the Archaeology, Anthropology, and History of Peru and the Larco Museum. They were both excellent and we got a real sense of the history dating back around 12,000 years. 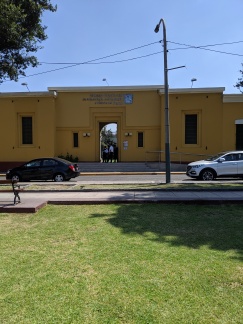 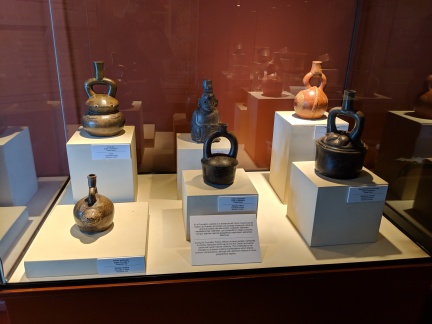 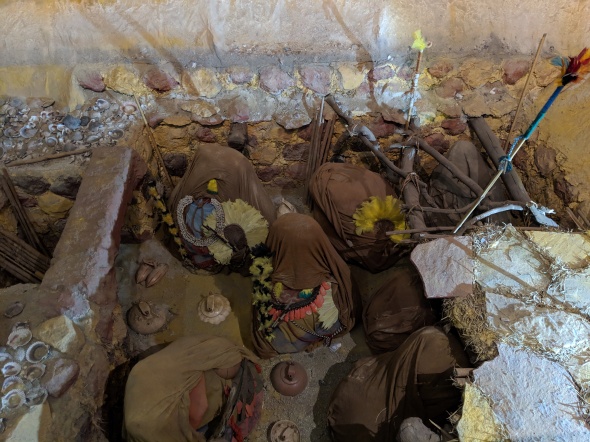 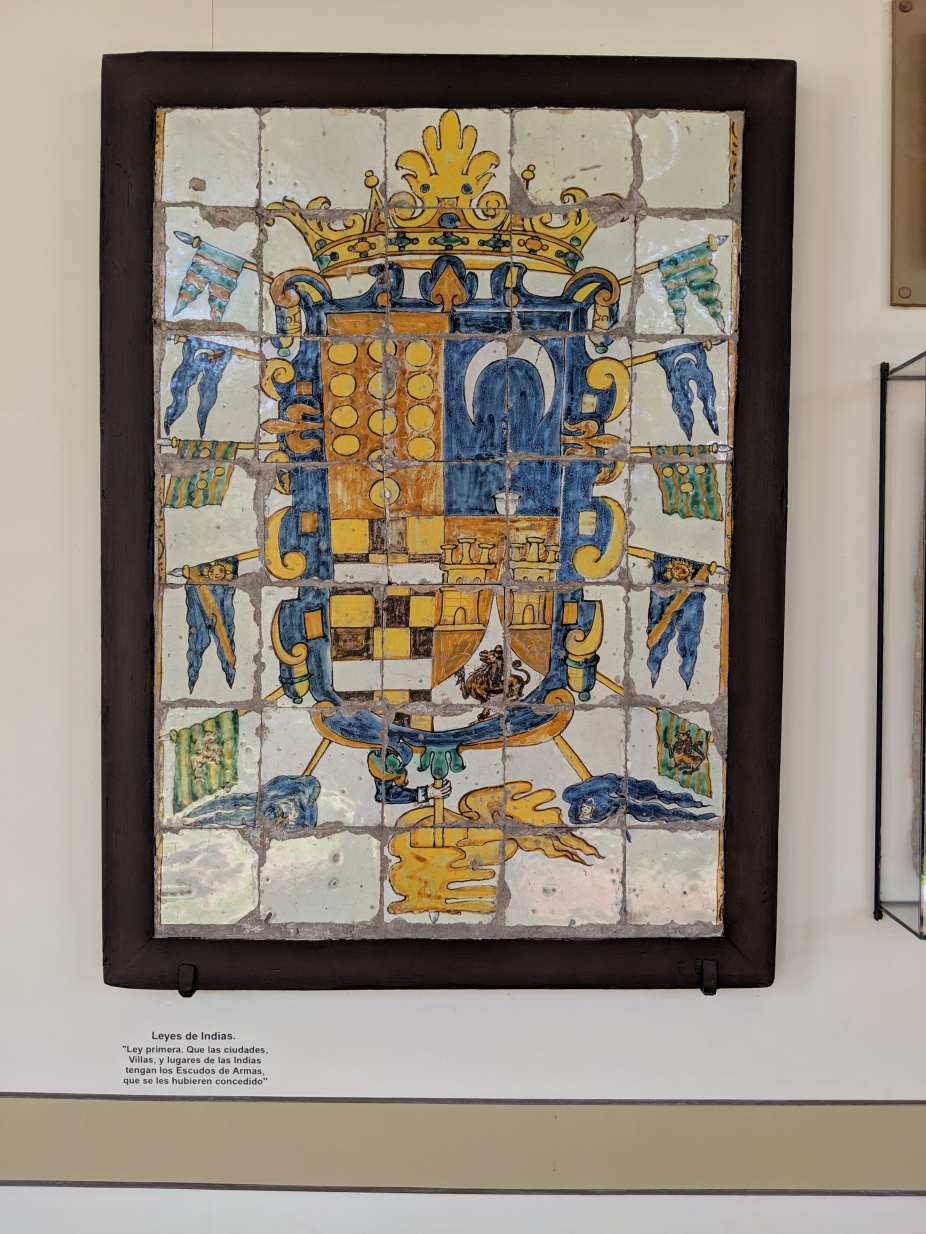 The Larco Museum was another level altogether. The first impression is stunning. It is housed in an 18th century vice-royal building that is covered in bougainvillea that are old and amazing. It is a private museum and was 3 times the price of the first one so we were highly skeptical. But we paid and entered. The intro was a 10 minute video and then the walk began. What immediately strikes you is the absolute quality of the pieces, they are virtually pristine. As you finish the tour through the actual display there is another room off to the side…this is the overflow. It is massive. A virtual warehouse of pre-Colombian artifacts that is seemingly endless. There was enough high quality pieces in the overflow area to stock another 10 museums. It is no wonder that the pieces on display were of such high quality, with such a massive range to choose from.

On our last day in Lima we finally bit the bullet and headed to Miraflores. It is the main tourist neighbourhood in town, that is described in the tourist blurbs as an upmarket suburb having a western feel. It is clean, safe, beautiful and is full of shops, restaurants and ritzy cafes…all those things that we try to actively avoid.

It has the ‘Malecon’ a 6 mile clifftop boardwalk starting at the marina and following the Pacific coastline. It hosts one of the world’s best paragliding spots as people launch themselves off the cliffs and for $US50 you can get strapped to one of the and launch yourself too…we did not do that. 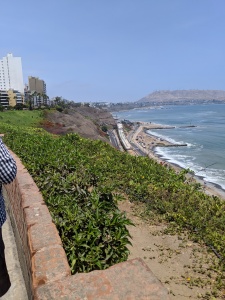 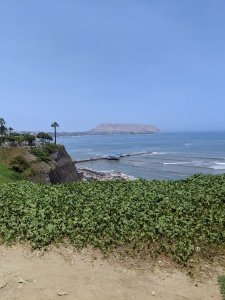 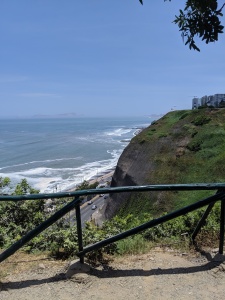 Miraflores was everything that it promised to be…it was just not for us. It was an expat enclave in the heart of Peru. All the usual chain stores and the culinary delights of McDonalds, KFC and Subway washed down by a Starbucks. And all of this for 4-5 times what you would pay in any other neighbourhood. It was pretty and the boardwalk was nice. but we were both so glad that we stayed in the centre of town rather than out here on the coast. On the up side, we did get to see the Pacific ocean from the other side. PS our side is bluer and cleaner. The one thing that surprised us was the sight of a Paddington Bear statue on the top of the cliffs at Miraflores. When you went to the plaque it said from deepest darkest Peru…and it all fell into place.

The final thing that we did on our last night was head across the road to the Circuito Magico Del Agua or the water fountain park. It is a light, laser and fountain show that runs almost every night and is quite the sight to see. 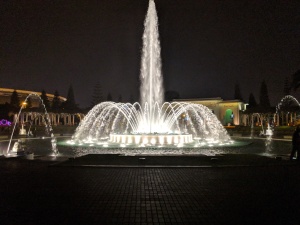 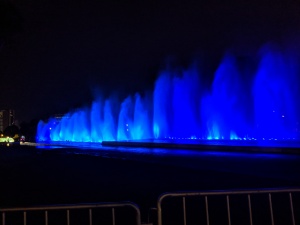 And because this was only a teaser trip to see if we should comeback we missed the main reason that most people come to Peru…thankfully…Miraflores has big photographic murals on the walls so you can cheat and pretend that you went. 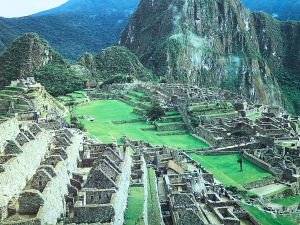 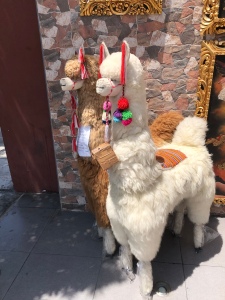