We live in WA now…

So we are here…in Perth…it has been a monster journey and we have seen and done so very much along the way.  Before we get into the world of Perth we will have a little summary of what it is we have done in the preceding 18 months…

We both left well paying jobs in Canberra to share our adventure together.

Overseas – We ran away offshore and spent 433 days backpacking through Asia. Hit 13 different countries, slept in 121 different cities and visited many more. We saw sights, climbed mountains, and sampled the local foods, beverages and culture at every step of the way.

Australia – We bought a new car, drove almost the full height north to south and did drive the full width east to west. We saw family and friends and even tried living in a tiny remote town. All up we drove over 14,000 kms in a 8-9 week window and that included a 3-5 week block of time in the middle where we went nowhere. 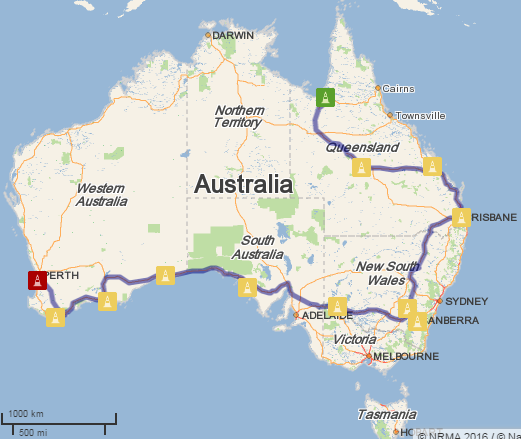 We got back to Australia with nothing but each other and debts… within a reasonably short period of time…we both found well paying jobs again, have cleared our debts and have racked up a wide variety of experiences along the way. I guess the moral of this story, for us at least, is that it is very possible to run away, give up all semblance of our former lives and careers and leave everything behind. Then once you have sampled sections of the globe you can come back, settle in a new place, both start new careers, in different industries, earning collectively as much if not more than you were before…and not miss a beat.

We left the last post with us having driven into Perth and with me job and house hunting. Jill’s new job was working for an aged care company and as we rolled into town they gave us bridging accommodation within one of their facilities while we found a place to live. In short…we were living in a retirement village.

To be fair I had no concept, knowledge or experience of what a retirement village was like and my knowledge was limited to TV shows that depicted depressing, institutionalised looking places that looked like hell on earth. Jill had long been interested in this area as the boom area of the future and over the last decade we had embarked upon numerous conversations about the future of aged care.

These conversations led to the facts that with the retirement of the baby boomers and the first real generation of self funded retirees coming through that the industry focus has been shifting from the stereotypical versions I had imagined to an almost hospitality model where the client is used to levels of service and value for money.

And this is what we found… We stayed in a manager’s unit that was centrally located within a retirement village above “the clubhouse”. They are not called retirement villages but rather they are independent living units but for my purposes retirement village works just fine. In reality it was a suburb of about 160 townhouses surrounding a centralised community area. Each townhouse was freestanding, fully independent and spectacularly maintained and the communal area had the clubhouse that contained a gym, library, pool, bowling green, putt putt course, pool table, art and craft rooms, an industrial kitchen and heaps of dining and recreation space.

Being independent units, the cooking was generally conducted in your own home but each Saturday they would hold an optional communal event for those that wished to attend. This was organised by the residents and rotated each week. There were raffles, drinks and pleasant company and for about $5 they organised various food option nights…things like fish and chips, chicken, pizza etc. On the odd night about once a month they held a special night when some of the ‘menfolk’ took over the kitchen and prepared a monster feast.

Every afternoon at 3pm (just after the scratch lawn bowls game) the bar would open in the clubhouse and beer, wine and soft drink was available for the ridiculous prices of $1 for a wine and $2 for a beer can or bottle. Needless to say that after job and house hunting through the day, this became a regular home for me while Jill was still at work. And of course my beer sampling continued…including some uniquely  local brews.

While we were on average 15- 20 years younger than everyone else we found some great friends here and were inspired by what life in such a village was actually like. While having a beer one evening I casually inquired about golf. By noon the next day somebody had sourced a set of loaner clubs for me and a group of us headed out to the local course for 18 holes.

People there basically kept doing the things that they had done and enjoyed before moving in. But now they shared the activity for those that may be interested. We met a lady that was a fitness instructor before she retired and she became the host of water aerobic sessions each morning for those that wanted it. There was workshops and now men’s sheds for the wood and metal workers, sewing  and knitting rooms. It was all organised by the people there and they were all ‘opt in’.

In short it was great and led to the why wouldn’t you get into one of these joints as soon as you turn 55 (the eligibility for entry) conversations.

Anyway…I found us a place to live a job for me. Our home is walking distance to everything the CBD has to offer and has a restaurant strip walking distance in the other direction. We are about 250 meters from the Swan River as the crow flies and half way across the the river is Heirisson Island (a landscaped nature reserve) that contains a mob of Western Grey Kangaroos. This is a favourite for tourists as it is a leisurely 2km circuit walk around the island and you are almost guaranteed to see the roos. 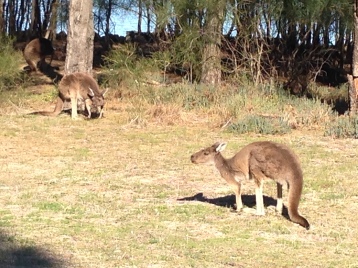 Roos in the heart of town

Perth from the south

Perth waterfront is lined with parkland and green space which means at most angles looking either in or out from the city the views are stunning.  On the city side is Langley Park, a 900m x 100m rectangular open park that was used as an airstrip in the 1920’s and is now used to host any number of riverside events. On the south Perth side is Sir James Mitchell Park which was named after the 13th Premier of WA and the park is similarly used. There are running and cycling tracks along the length of both sides and huge open areas that are full each weekend.

On the western end of the city atop mount Eliza is Kings Park. This is a 1000 acre park on the fringe of the city that is made up of grassed parkland, botanical gardens and 2/3 of the grounds are conserved native bushland. From here you can see some of the best views of Perth and for a short period I got the opportunity to work closely with the CEO of the park and set up my makeshift office out of the boardroom of the park…with magnificent views overlooking the city and the distractions of random backpackers stripping down to bikinis to soak up the WA sunshine…right outside my window.

So we settled in…started bashing our debts over the head and in less than a year we were back in the black and saving for our next adventure…We will keep blogging as we go… we have fallen in love with the beauty and variety that the West of our country has to offer…and rightfully so.

One thought on “We live in WA now…”