We arrived back in Malaysia for about the 5th or 6th time during the last year. Up until now we had not made it away from KLIA2 (the airport)…add to this two previous times and we had been to Malaysia about 7-8 times without ever having been outside of Kuala Lumpur. Alas we arrived at a time when smoke from Indonesian forest fires shrouded Singapore and Malaysia in a thick haze. We spent a night at the airport hotel then headed to Penang. 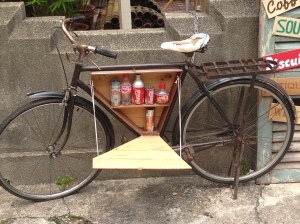 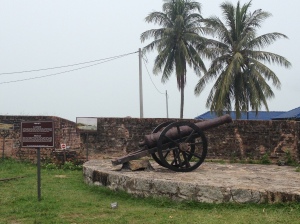 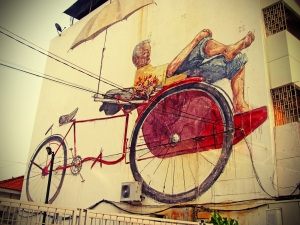 I immediately fell in love with this place. I had always held Malaysia relatively high on my list of nice places but this early foray has placed it VERY high on my list of favourite countries. Based in no small part to the excellence of the food available here…you can get anything you like here…add to this the happy and friendly nature of everyone you meet…how could you not love the joint.

Malaysia has been recorded as a major trading hub on the spice route going back as far as the 1st century AD. It seems to have had for almost all of its time a multi-ethnic, multicultural, and multilingual society…which continues up to this day. Malaysia’s foreign policy and apparently the populations policy is “officially based on the principle of neutrality and maintaining peaceful relations with all countries, regardless of their political system.” This means that they pick no fights and generally try to resolve issues pragmatically. As such there is very little disharmony and the place is a pleasure to be in.

We set up camp in the old town section of Georgetown which is the heart of the tourist district. On our first day our hotel owner sat with us for about 30 mins and on a map pointed out all of the tourist sites and identified the lesser known ones that were not to be missed. For the ones with a bit of distance he added the bus numbers, where to catch them, how long it would take and how much it should cost. All of this at no cost and with no benefit to him other than making sure that our stay was as pleasant and fulfilling as it could be…WOW… 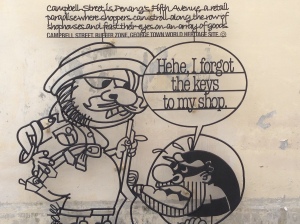 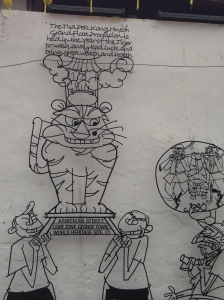 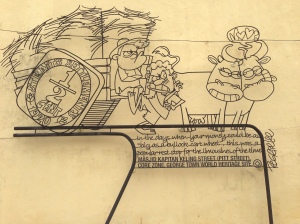 The main thing you see when you hit the old town section of Penang is the street art. It is everywhere. It started from small beginnings in an attempt not to lose the history of the neighbourhoods but has grown a life of its own. Every street, every corner, any spare bit of wall is fair game for what has become roaming gangs of artists. Not graffiti…actual art. And some of it is incredibly clever and it adds a whole level of character to old crumbling buildings…so much so that the crumbling etc is incorporated into the art. The street art here is a beast in its own right so I will do an extra sideline for this alone.

On the first night we migrated into little India in search of a feed and a beer (which we thought may be a little challenging in an overtly Muslim country). No issue. We wandered through typically (sort of) Indian streets and markets with spices, trinkets, saris, tailors, food and gram everywhere you looked. I say sort of…because it was clean here…no urine and faeces (human or cow) on the road. The water was clean and running (not in a rusty, filthy drum) and all the scary bits about India were removed leaving only the best bits.

With this knowledge we happily settled in for a meal. Alas it had been too long between curries for me and I went crazy with the ordering. I absolutely love the concept of having a bit of everything…thali style…but for two of us spraying orders across the menu is less than ideal. Either way I ordered about 6 mains for the two of us…plus breads and beers. What was delivered was authentic Indian…it was good. I however have been reminded of the two dish ordering rule…in my defence…we ate it all…and it was fantastic. 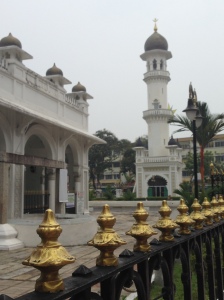 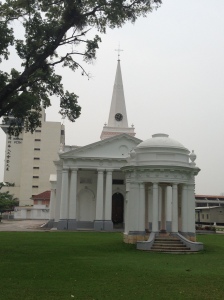 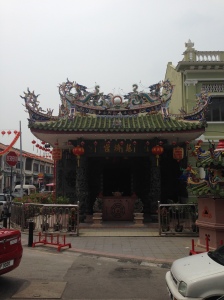 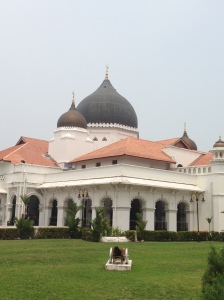 The next day we hit the road following the map suggestions of our hotel owner which were spot on. The first port of call was the local Yum Cha (Dim Sum) joint about 150 metres down the road. We then wandered up “Jalan Mesjid Kapitan Keling” commonly known as harmony street…why harmony street…Because the Kapitan Keling mosque, Kuan Yun Chinese temple, Saint Georges church, Hindu Sri Maha Mariamman temple, Cathedral of Assumption, Acheen street mosque, Nagore shrine and the Khoo Khongsi clan temple are all located side by side within a 5 minute walk. As they have done for the past 180 years.

So we wandered the street hitting the end where we found Fort Cornwallis, town hall, city hall, and a bit further on and around the corner the Cheong Fatt Tze mansion for the guided tour. All of this was on the recommendation of our little dude and it was all awesome. The only detractor of this was that the town was still choked with smoke from the Indonesian fires, it was about 34 degrees and high humidity…and we both had bellies full of curry and yum cha making it a touch uncomfortable.

We hid In the air conditioning for a few hours before heading out to the red garden food court which is a brilliant food court style eatery surrounded by almost every type of hawker stall you can think of. We got our seat, ordered our beers and off I went in search of food. Alas I completely forgot (or disregarded) the 2 dish rule…I cannot be trusted with so many delicious food options. We had Chinese roast duck, Syrian schwarma, Asian braised pork belly, some Malaysian noodles and German beers and got change from a $20. Oh my…we would be back. 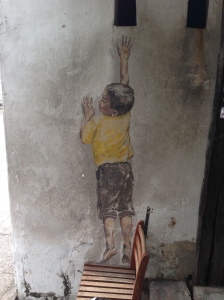 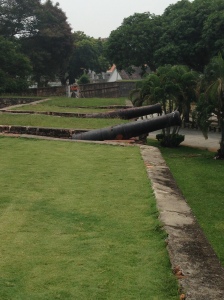 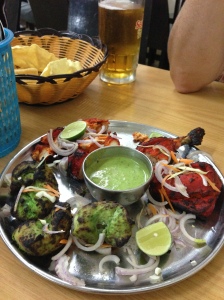 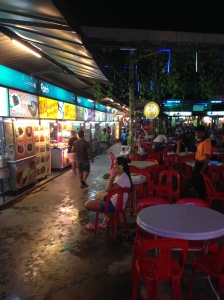 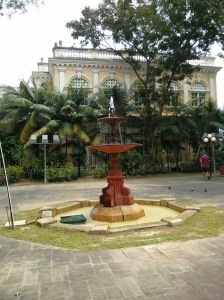 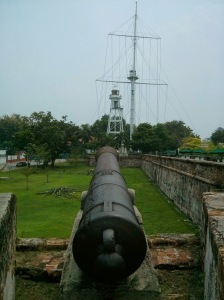 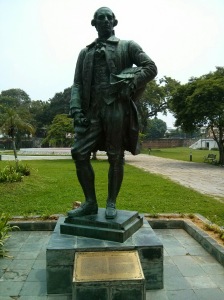 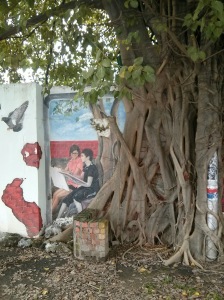 The next day we got up late and missed our yum cha and had to settle with coffees and scones for Jill. We then hit the art trail using the well appointed map supplied by our little hotel dude. Another high temp high humidity day but 4-5 hrs of walking and checking out and photographing the street art…followed by another night at the hawker stall for another spray of delicious goodies from across the region.

The next day was day 365…our 12 month anniversary since departing Australia. We had a day in…blogging, this and our 365 post followed by a revisit to little India for more curries. My god I love this place. The next day was sushi train, some assignment prep for Jill and back to the food court for our last meal in Penang as we would be leaving early in the morning to head to Borneo.

One thought on “Penang”