We came into Hong Kong for one reason only…to catch up with some of our favourite people, Mike and Patricia, who were holidaying here. These guys are great friends that we had not seen for over a year…and the short hop across from Vietnam to catch up was not to be missed. While we were here we would also take the opportunity to see some of the bits of Hong Kong that we didn’t see when we were here in March for the rugby 7’s. 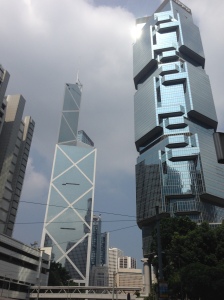 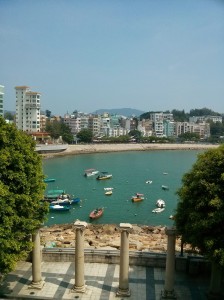 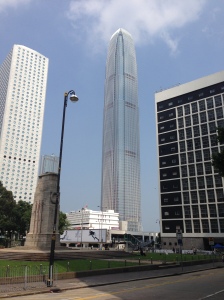 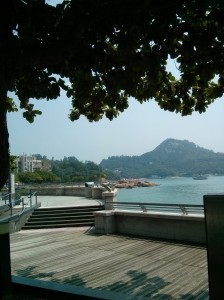 We left Hanoi at 7am and did the flight to Kuala Lumpur, hung out at the airport waiting for our connection then did the flight to Hong Kong arriving at about 9pm. Alas we arrived in Hong Kong amidst a furore of protests which centres on the election of Hong Kong’s chief executive. Under a new plan, Hong Kong residents would be allowed to vote for chief executive for the first time—but only from candidates approved by Beijing.

These protests are taking place across Hong Kong but are centred in two main areas, being central and Mong Kok (Kowloon side)…the violent clashes, arrests and tear gassing is happening at Mong Kok…our hotel is in Mong Kok…about 80 metres from the centre of the protests. Mike and Patricia are in a much nicer place…about the same distance the other side of the protest. So to catch up…we traverse through the middle of the demonstration each day. 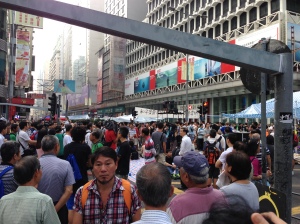 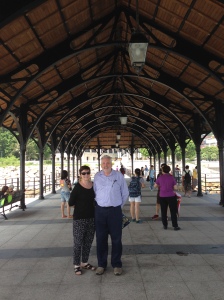 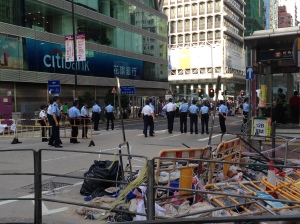 In reality there are two opposing protests happening simultaneously…this is mostly split across generational lines with the pro-democracy (students) using “occupy” tactics and shutting down the roads in the two main business and shopping districts. And the anti-occupy group which are mostly middle aged business people upset that the occupy tactics have shut down shops for over a week. The peaceful students were being confronted by frustrated business owners, the odd triad roughneck, and the ever present “rent a crowd” agitators (that exist all over the world) which in turn were met by police. During the day this is quite calm, but of an evening this turns into an entirely different prospect. 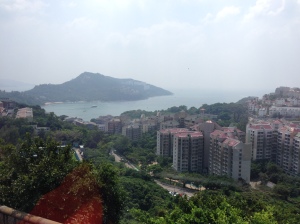 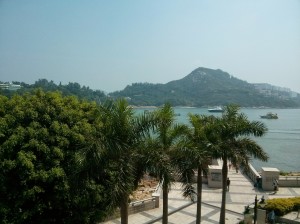 We sat one evening having a lovely meal watching hundreds of police (tooled up) filing past our restaurant…in the direction of our hotels. We finished our meals but called an early end to our post meal sip and bunked down for the night…as we listened to the sounds of sirens, shouting and chanting etc into the wee hours. All of this had been going on since the previous weekend…and the key question was how much longer would it be allowed to continue. 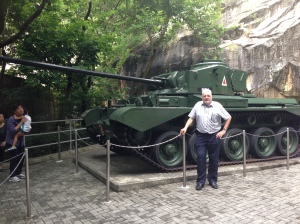 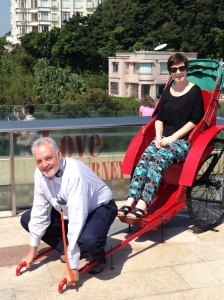 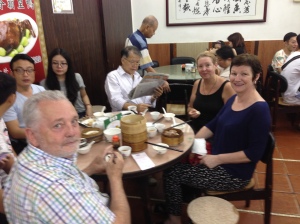 Despite all the goings on, the place was fairly calm and apart from late in the evenings we did not feel uncomfortable or unsafe. We walked calmly down Nathan road (which was a lovely pedestrian walkway thanks to protest road closures), then traversed the mid level escalators, before being caught in a monsoonal downpour. The next day headed out to the world’s oldest continually operating yum-cha restaurant for breakfast, hit the Dr Sun Yat Sen museum, checked out the maritime defence museum and generally ate and drank and enjoyed each other’s company and catching up after so long.

We then headed off on a bus to the opposite side of the island to Stanley a former pirate port and one time (1842) pseudo capital before the British moved it to the current site. A lovely day traversing over the mountains and wandering along the peninsula and having lunch by the seaside. The highlight of the day was watching Mike haggle with both the shop keeper and his own wife simultaneously. 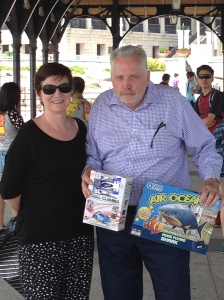 In short the starting price was 200, Mike offered 120, the shopkeeper refused so Mike said he would go somewhere else…

Mike kicked in with all of the long standing haggling tools of the trade such as threatening to walk away, being generally disinterested in the item, and claiming the price was just too high…

Enter Patricia…who chimed in with…but that is a good price, it is the same as that Asian guy before you paid…so…

Mike offered more, the shop keeper counter offered, Mike started to walk away…Patricia pulled Mike back and told him that he should give the shop keeper an extra 20…This happened about 3 times…Mike tried valiantly to haggle but it was 2 against 1 and every tactic he employed Patricia countered…the shop keeper was laughing…Mike was whipped…he ended up paying 180.

After we had eaten lunch he stopped at a different shop and bought something else…but by this time he had lost his mojo…he paid the sticker price, no haggling, no negotiation… He just meekly handed over the cash…a beaten man.

The next couple of days was spent being tourists, eating yum cha and having a nice little sip. We somehow managed to pick close to the clearest days (smog wise) to go to the top of Victoria peak and were able to get some relatively clear shots of Hong Kong from on high. We were warned to go early as the tram ride to the top gets packed…and boy was that good advice. We headed up early, had coffees overlooking the city, poked around at the top, had lunch on the summit and took the tram down. At this point we were met with the lines that we would have faced had we done the yum cha breakfast that we were going to do first.

From here we headed to the nunnery and the park which had some of the most impressive bonsais and topiaries on the planet. A slow wander around the park and a great day was had by all. Cap this off with cheese, sushi, bubbles, red wine, beers and gin and tonic in their room…and all was good and time for Jill and I to traverse the midnight protestor crowd. 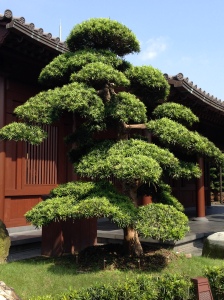 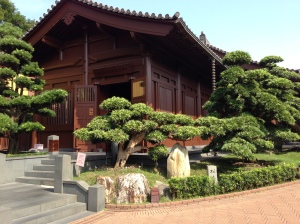 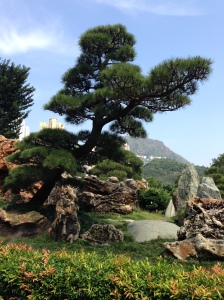 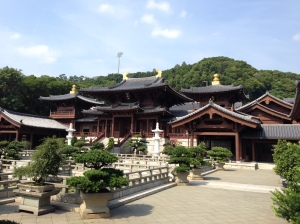 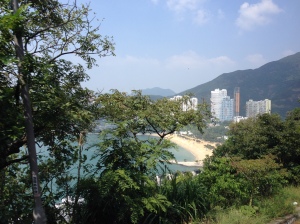 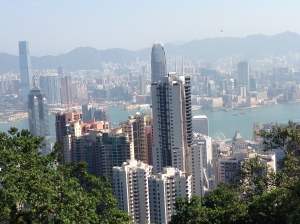 We caught up with Jeanette (not sure of the spelling) a long time friend of Mike’s who has been living and working in HK for 17 years. She lives off the main island, on Lamma Island, a short ferry ride away. So on her day off (we learnt that in HK they do 6 day weeks of about 54 hours) we hit the ferry to Lamma Island for a catch up. On what was her only break for the week she was the perfect host, taking us to a great yum cha on the island. We did the one hour hike to the other side where we settled in to the breezy Oceanside restaurant for drinks and pleasant conversation. After sampling several less than auspicious ales we got a ferry back to the big island and then out to an award winning restaurant for dinner that evening. 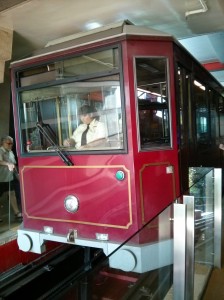 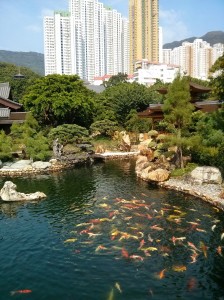 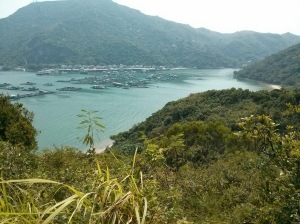 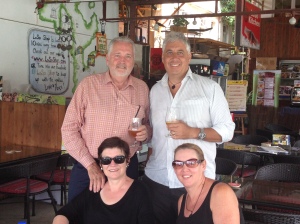 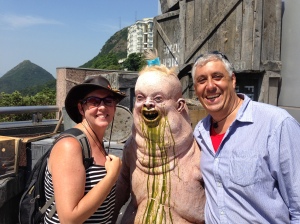 And our catch up was over…a last minute souvenir shop at the local markets gave Mike one last chance to redeem his haggling mojo while shopping for trinkets. He had done fairly well reducing a starting price of 180 down to a final price of 100. A short distance further on I asked how he had gone and then tried to see if I could match his negotiated price…I asked how much…and she started at 100. We exchanged looks and chose not to keep playing this game and walked away with the sound of the woman shouting lower and lower numbers at us with each step. Nothing more was said on the matter.

Mojo not restored…we continued for a last meal and a couple of beers and rued the fact that we had not seen each other for so long. Moments like this week have reminded us that friends are those people that we choose to allow into our lives. We have chosen well.

One thought on “Hong Kong”