Da Nang and Hoi An and out

Leaving Cat Ba we were faced with the nightmare transit…but in reverse. After the journey inbound we decided to use a different company on the way out…and it was immediately better. The transit still involved a 45 minute bus to the ferry, a 40 minute ferry to the mainland, a 45 minute bus to the bus station, a wait, a 2 and a half hour bus to Hanoi bus station, a cab to the airport, a wait, a one hour flight to Da Nang, and finally a cab to the hotel. But even with all this it was fine…no screaming kids, no obese Americans with 15 items of luggage each, no obvious skin diseases, minimal loud talking…just a complicated commute.

Da Nang is the 5th largest city in Vietnam and was lovely. Very little to see in real terms but a really pleasant feel about it. Most people come for the beaches and the stunning seaside promenade…for this we chose Hoi An instead. Rather we stayed in the heart of the city and took in the riverside promenade scenery and checked out the local attractions. Temples, pagodas, dragon bridges and churches were the order of the day. 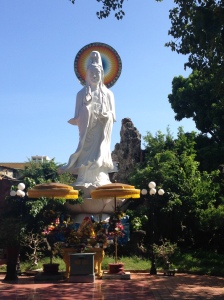 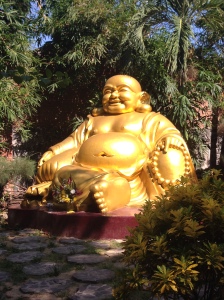 Add to this the street side gem restaurant that we always manage to find and life was good. Our first night we found a tent on the side of the road selling cold beer. It was hot so we stopped. We ended up playing menu point and pray, lucky dip and struck gold with 3 awesome dishes of Kim Cut Roty (quail), Ben Cha (mystery meat with raw garlic) and Cai Xao (pork mince with rice cracker and murderously hot chilli). These with 10 cans of beer came to a total of 240,000 duong ($12). The next night was squid, pork ribs and a different mystery meat concoction.

We hopped a bus for the 45 minute ride to Hoi An which is a tourist beachside town In the middle of the country. It is UNESCO listed thanks to its old town which is apparently the perfect example of an Asian port town between the 15th and 19th centuries. Today it is a tourist Mecca with everything imaginable on sale…but most notably the tailors shops. There is a tailor shop every third store ready to quickly knock together almost anything you like…for very cheap.

A tailored suit, with shirt can be purchased for as little as $65 but more likely around the $120-150 mark. You will be measured up and by the next day or two you can pick up your specially made items. This is a long held thing throughout Asia and I have had 2 suits made (one in Bangkok and one in Singapore)..but this place is even cheaper again. Alas our backpacking does not allow for such purchases…but if you were in the market you could not go wrong here. 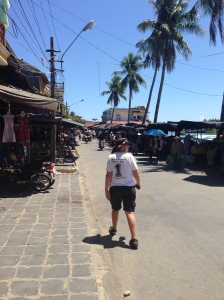 The town and surrounds are beautiful, the food is great, the place is clean and almost everyone speaks fluent English. If anyone is looking for a 1-3 week getaway you really cannot go past Hoi An. There are 5 star resorts if that is your thing, backpacker hostels or in our case a nice 4 star equivalent joint, with breakfast included and a pool for $25 a night for both of us. We had blue skies throughout our time here and the only detractor was the oppressive humidity that leaves you soaked in sweat if you try to exert yourself too much during the middle of the day. We found that this could easily be avoided by lazing by the pool and swimming.

At night ancient town glows from thousands of lanterns and the shops and restaurants are abuzz with activity. We found an awesome little restaurant on the recommendation of fellow travellers and sat down to the set menu (pictured beside). This place was amazing. your food was on the table before your bum was on the seat.

The staff had you watered, and were showing you how to compile the ingredients listed beside into rice paper rolls and how to eat the local delicacies. So mush so that they will dip the rolls that they make into the chilli and satay sauce for you and actually feed you. From here you are on your own. This place was an eat until you are stuffed joint and I am certain that they would keep food coming as long as you were able to ingest. Round one was more than enough for us.

At the end of our meal we had eaten our fill, washed it down with 4 beers and when our bill came we paid the exorbitant price of $15…for both of us. After a few days in Hoi An we headed back to Hanoi for the trip to Hong Kong. At this point we had had a great time in Vietnam with the minor exception of Saigon. As we were only transiting we stayed at a hotel next to the airport, with a pickup service, for a shower and an overnight kip. Alas our parting memory of Vietnam was spoilt by this…the hotel we booked and another one around the corner was owned by the same mob…one cost 50% more than the other…we had booked and paid for the nicer of the two and upon arrival the pick up driver was told to take us to the other one.

Arriving at the lesser one we were relatively understanding…until we found that the wifi was not working and they had lied to us about services available. Jill hopped online using her phone and found the price differential between the two and the ranting white woman kicked in. Within the hour we had walked out, been picked up by a taxi and shuttled to the original hotel, at no cost to us, and were given what we had paid for. Needless to say a gobful was handed out to any poor bugger who came within earshot of my darling bride.

That night we headed into the back streets to find a meal and came across a tent with a street side smorgasbord. We entered, pointed at an array of items which were piled high onto a plate of rice…then pointed at some beers and we sat down to a great meal. At the end we walked up to pay the bill…which came to a massive 80,000 duong ($4)…this was 2 huge plates of food and two 600ml beers. 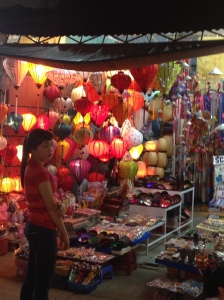 Our introduction to Vietnam was not ideal. Saigon was a busy city and we were staying in the bar district which meant we saw the worst that western tourism can bring to a developing country…lots of old fat men trying to pick up small Asian women (LBFM’s for those that know the terminology). This gave us immediate Philippines flashbacks which were not pleasant. Add to this the poor initial food options and little to see and we were less than impressed.

This was followed by the Mekong delta which was a little better but not thrilling…and then the world changed. Everyone who has been here loves the place and from this point on we both understood why. We actually did not have any negative experiences at any point throughout our Vietnamese odyssey but by the same token it had not grabbed us by the throat like India, China, Kyrgyzstan and Sri Lanka had done.

It is possibly the ideal introduction to Asia that you can find. The people are friendly, the food is good (once you learn to avoid the evil weed that is coriander…maybe that is just me), the prices are cheap, the place is safe, the beer rocks, and the sights are pretty without being historic. It is family friendly, has awesome beaches and Ha Long Bay is a must see for everyone.

I think the thing that turned Vietnam around for us was a change of attitude on our behalf. We had been travelling for almost a year, seeing historic sights and taking in the history and majesty of ancient worlds and huge constructions like palaces atop mountains and the Great Wall etc. Vietnam is not about this, it was smashed during the war and is a nation that is, and largely has, recovered. The historic sites are relatively minor…it is like going to Australia which is 200ish years old and trying to compare it with the colosseum in Rome…apples and oranges.

Once we shook off that way of thinking we loved the place. It is the ideal location for a 1-3+ week holiday and we will come back for just that at some point in the future. It would be incredible to do the country by yourself on a motorbike or similar where you can get up into the mountainous regions and explore the place on your own schedule and timeline. Everything that we have seen would mean that this is entirely possible, and every time we hopped on motorcycles here we thoroughly enjoyed ourselves. Hanoi and Ho Chi Minh may be tough to negotiate however as the traffic is entirely nutty.