Landing in Ho Chi Minh City in Vietnam the original impression was great…there is a quiet zone inside the airport where you can get money, arrange airport transfers and local phone cards entirely in peace. Once these simple logistics are sorted you then step out into the throng of spruiks, touts and general madness that exists with every Asian commute.

We headed to our hostel to find our room was not ready so we bounced around the streets in a range of local bars killing time and a wide variety of beers waiting for our room. Beer here in Vietnam tends to range in price anywhere from 10,000 dong all the way up to a ridiculous 50,000 dong (50 cents up to $2.50). We had the obligatory wet season afternoon downpours and generally enjoyed the sights and sounds of a new city.

Room ready, we dumped our gear and ventured out for an evening meal. Jill had booked our hostel in the middle of the tourist bar and nightclub district. This brought about a new game for Jill. She would walk about 10 metres behind me and laugh as the local hookers and bar girls would see me and commence their patter and then she would appear and they would all go oh…and stop. She thought that this was a fun game.

On the food front I had been dreading the next couple of legs and the Ho Chi Minh foray saw a lot of my fears come to light…Jill on the other hand was fine. I have a long held dislike for cucumber and I find that coriander overpowers everything in a dish. As such these are my two most disliked items (brussel sprouts are high on any list too) and Vietnam, Cambodia and Thailand tend to use them all liberally. Jill loves them so she is having a ball while I am hunting for and eating around some of the staple foods of the land. The fresh spring rolls and bowls of Pho have Jill in bliss and I have had 2 spring rolls each one was laden with one or both of the offending items so I stopped trying them. Thankfully the Pho comes with a plate of fresh herbs and you can add your own…so I have the opportunity to eat this at least.

The next day we headed out on the tourist trail starting with a walk to the Ben Thanh market which is in the heart of town and sells almost everything on the planet…cheap…if you are wiling to fight and haggle. From here a walk to the opera house, around to the peoples convention hall, past the revolutionary museum and on to the Notre Dame cathedral. 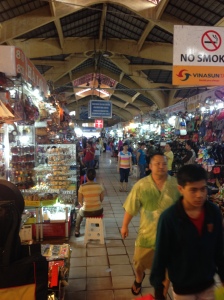 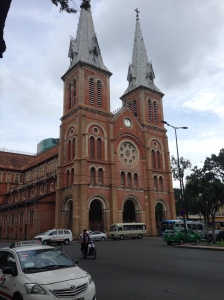 At this,point we had reached the war remnants museum (which was formerly called the “Exhibition House for Crimes of War and Aggression” and before that the “Exhibition House for US and Puppet Crimes”). This is possibly the most confronting war museum in the world. There were images and stories so graphic as to turn people’s stomachs and visibly queasy people could be seen. Photos of dismemberments due to shelling and more of the napalm and agent orange victims abound. 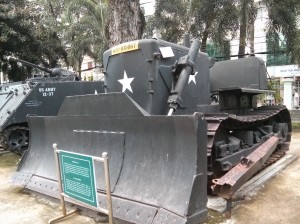 Possibly more confronting was the photos of the disfigurement and retardation caused by the Agent Orange bombings, a generation on… No doubt there was elements of propaganda throughout but either way this was one of the grittiest war museums I have been to…highlighting the bad sides of war rather than the heroism that is normally displayed. As a positive the ground floor had stories and photos of people overcoming and living with their disabilities and deformities.

The one thing that Vietnam has that is new for us since leaving Australia is a rumble…the sheer volume of motorbikes on the roads means that the entire place rumbles. No one bike is overly noisy but the constant stream of thousands of bikes means that there is a constant vibration. Having left China where all the bikes were electric and silent this was quite the change for us.