While travelling through China we met a lovely Sri Lankan couple who spoke highly of the place and our visiting. We had kept in touch through Facebook and when we decided to come they could not have been more helpful.even to the point of getting cricket tickets for us for the second day in town. Alas our journey to Sri Lanka started with disappointment before we even arrived. The original plan was to attend a ODI cricket match in Colombo between Sri Lanka and Pakistan but weather set in and they moved the date forward and changed the venue meaning that we missed out.

We arrived in Colombo after a 22 hour transit from Beijing via Kuala Lumpur in Malaysia. Air Asia X provided a good cheap flight option that was very enjoyable but sadly was ruined by Jill’s bag being all but destroyed, when she went to complain she was told it was minor damage that they would not even take a report for…and that she should claim it on travel insurance. After a rant about customer service she left unsatisfied and ignored.

We got in to Sri Lanka and were immediately struck by how unlike India this place is. It is clean, tidy and people have pride in their surroundings and the environment in general. We were picked up, driven to the hotel, got our local phone, had a meal and some local beers and met up with Ruwan (our Sri Lankan mate from China) all within 90 minutes of being in country. A bunch of tuk tuk rides later and a foray into local street food (shrimp including the shells and heads etc mashed into a paste, made into a rissole, deep fried, smothered in chilli, topped with onion) we had seen Colombo by night and plans were made for the next day.

The day started with meeting up with Ruhan outside Town Hall near the Buddha statue and a walk through Viharamahadevi park which is opposite. This was a really pleasant walk in the shade. Sri Lanka is hot but not excessively so…Colombo is blessed by awesome sea breezes almost all day so the heat is immediately bearable. We hit the National museum which was ok content wise by museum standards but the building and the grounds were spectacular. There were massive Banyan trees throughout the grounds that must have been many centuries old and even for a botanical heathen like myself they were the highlight. 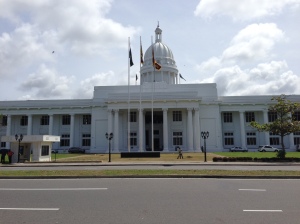 Having headed out we did the tourist schlepp chauffeured by our mate and hit Independence Square, Beira Lake, slave island, the lighthouse, Sambodhi Chaitiya dagoba, a market for some shopping and a massive lunch, Gangaramaya Buddhist Temple, old Dutch hospital, Hindu temple, grand mosque, Parliament House. We stopped for cold drinks and fresh juices throughout the day and generally had a really pleasant time. No harassment, no filth, no drama. 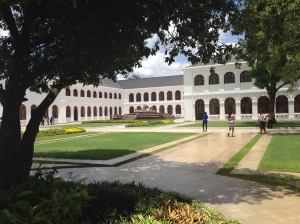 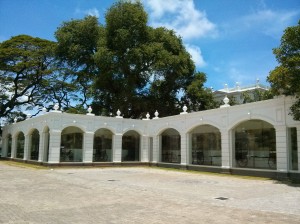 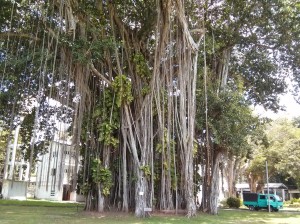 At sunset we headed to Galle face green which is a magnificent stretch of green lawn directly fronting onto the beach, with sea breezes and throngs of people day or night. The place has the Sri Lankan flagpole and at sunset the military ceremony of the flag lowering, combined with the sun going down over the Indian Ocean is not to be missed. As the breeze blows permanently off the ocean the area is full of parents flying kites of all varieties with their kids. 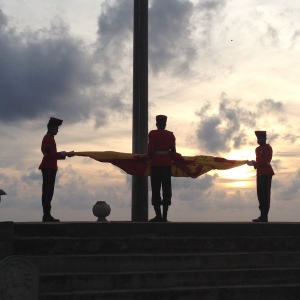 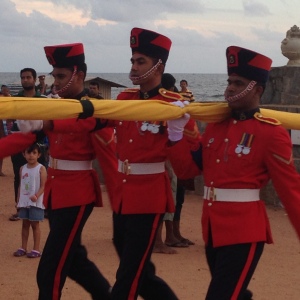 On the food front we have been absolutely spoilt. The main dish is Kottu or “Koththu Roti” which is a Sri Lankan version of left overs in a fried rice. While notionally leftovers it is made fresh almost everywhere with your choices of fillings but vegetables, egg, shredded roti, onions and rice are the staples and you pick and add the bits you want added. This is generally done on a flat BBQ plate and the clatter of flying metal scrapers as they chop and mix the concoction is both mesmerising and deafening. 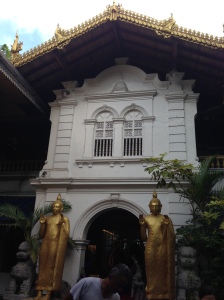 My favourite both before I came and since being here is the egg hoppers. Wiki tells me that “hoppers are made from a fermented batter of rice flour, coconut milk and a dash of palm toddy”. The unique part is that hoppers are cooked in small “wok” like rounded pans so the dough cooks thick and soft on the bottom, and thin and crunchy around the edges. Add to this the string hoppers and the plain hoppers with some of the ever present pickles, chutneys and sambol and you have for yourself a great feed.

We headed out to Livinia Beach for a flash feed with Ruwan and his wife. It was a Chinese restaurant (of all things) right on the sand. The setting was spectacular with the lapping of the waves but the food was trash. This may be an ongoing issue for us as we cannot go to Chinese restaurants anymore as they will not be authentic. We already have our doubts about how authentic the Australian version of Indian is…we are now adding Sri Lanka, Vietnam, Cambodia, Laos and Thailand to the mix…we may be screwed on future take out options. Now the food at this restaurant was tasty enough but nothing like what we expected when we ordered.