Our foray into Tibet started with a 24 hour train journey from Xining to Lhasa. This is the world’s highest railway, the “Qinghai-Tibet Railway” with some people calling it (falsely) the “rocket to the roof of the world”…this is by no means a rocket train. The train peaks at a whopping 5072 meters above sea level at the Tanggula Station, also known as Dangla, which is unsurprisingly the world`s highest railway station. 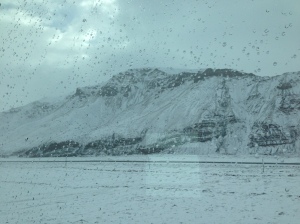 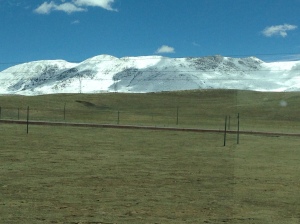 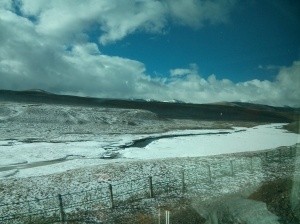 The oxygen here is half of that which is available at sea level and as such oxygen is pumped into the cabins of the trains from the 3500 meter mark. This would ordinarily be a good thing but alas this is offset by hoards of Chinese men standing in the enclosed trains smoking cigarettes next to the no smoking signs. As a former smoker for many years I am fast becoming an anti-smoker due to the manner in which the Chinese blatantly disregard all semblance of consideration.

The scenery along the journey is spectacular…with wide sprawling plains criss-crossed by streams and dotted with sheep (the non fat bottomed kind) and yaks…all leading to snowy peaks. When the sun rises in the morning you find yourself in a 100% whiteout as the clouds and snow envelop the train. As the train climbs to its highest point the clouds give way to the icicles that slide down your windows and the majesty of the mountains.

The trip to Tibet is very heavily controlled and cannot be done on an individual basis but rather must be done as part of an organised tour. This obviously adds to the expense and places you fairly in the midst of touristville with no options for escape. The first real stop on the tour was the Potala Palace which is the traditional home of the Dalai Lama and has been since the 17th century.

In 1959 the current Dalai Lama fled to India during the Tibetan uprising. The palace is built at an altitude of 3,700 m (12,100 ft) and houses the mummified bodies of the previous Dalai Lamas (5-13). According to our guide the monks go in to cut the hair and fingernails on the deceased Dalai Lamas every so often. 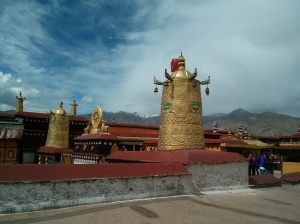 Following the Potala Palace we headed to the centre of town to the Jokhang Temple which is the oldest (7th century) and most important temple in Lhasa. The temple is surrounded at all times of day by people performing a full body prostration kora around the temple. For the heathens amongst you (like me) they stand praying for forgiveness for the sins of the body, the mouth and the heart…and then lie face down on the stones…stand take three steps…and do it again. The guys in Lhasa did three laps of the temple (about a kilometre each lap) but according to the guide people are known to do this between religious sites totalling over 500 kilometres. Many of the ones we saw had callouses on their foreheads. 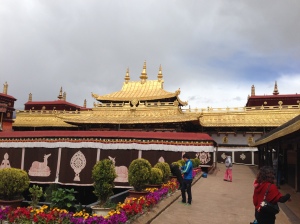 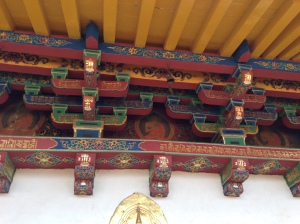 The next day we headed off en masse again to the Drepung and Sera Monasteries. The Drepung monastery was the home of the Dalai Lamas prior to the construction of the Potala palace by the 5th Dalai Lama. As such it holds the bodies of 2-4 with the first Dalai Lama really not getting a lot of kudos. These are beautiful sights on either end of the city. We had planned to head to the museum but were advised by the tour guide that there was no history there…just the Chinese story about the peaceful integration of Tibet. 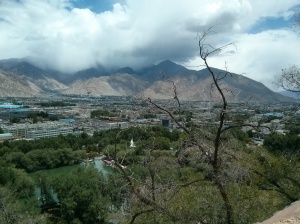 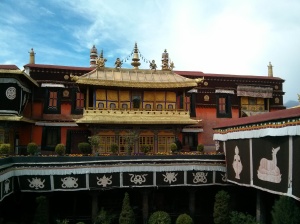 The monasteries at high altitude are proving to be a fair challenge. The scarcity of oxygen, combined with the stairs you climb to get to them means you are breathing very heavily when you get there. Alas upon arrival you are sucking in gobfulls of incense. Add to this the fumes from the yak butter candles and there is some serious hyperventilating going on. I swear that breathing in the fumes from the yak butter candles upped my cholesterol level by about 5 points. 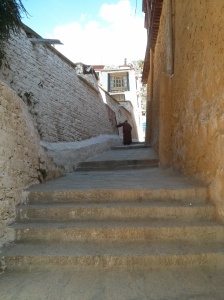 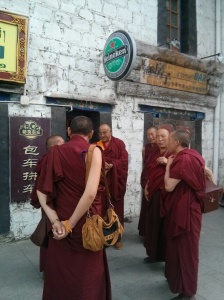 On an evening outing we floated past the Potala Palace on our way to the local night market and found that is was lit up in the evenings. So on our return to Lhasa after hitting Mount Everest Base Camp we grabbed the group and headed to the palace for an evening photo shoot.