After our monster transits we finally landed in Varanasi. Got into Varanasi in the rain at peak traffic time. The rain turned the streets into muddy torrents in places and given that we were already tired and emotional it was not a fantastic start. We hooked up with an Aussie and a yank (Marita and Tayla) who were on the same flight and at the same hotel, so we shared a cab and later on a meal.

The next morning the rain had stopped and we went exploring the banks of the River Ganges. Varanasi is the oldest inhabited city in India and is known as the spiritual capital of India. We wandered along the River bank watching the Ghats as they emerged from the seemingly never ending series of steps coming up from the River. We hikes taking in the sights, sounds and smells of the city.

Varanasi adds another dimension to most Indian cities as it has the Panchganga Ghat and the Harishchandra Ghat (where Hindus cremate their dead). These are areas where funeral pyres are built and corpses are brought down, dipped in the holy river, draped in fancy cloth and set alight…for all to see. Needless to say photography here is considered poor form. But we stayed and watched about 6 of these. That evening we joined the girls to celebrate a milestone birthday.

After Varanasi we took what was to be a simple flight to Delhi then on to Amritsar. Delhi threw us another slap in the face while transiting with a delayed/late plane, missed connection, lost luggage, refunded fare, twice as expensive replacement fare, luggage found but damaged. I swear that New Delhi hates us.

Amritsar was spectacular. The two main things we went there for was to see the Golden Temple (Harmandir Sahib) and the border show. Both of these lived up to all expectation. The first night we hit the border show which takes place in Wagah (the only road border crossing between India and Pakistan). The village was divided by independence in 1947. Today, the eastern half of the village remains in India while the western half is in Pakistan. 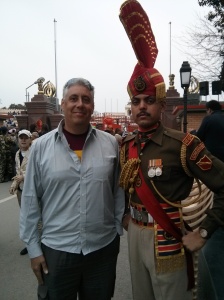 This ceremony is in essence a pissing competition during the lowering of the flag ceremony. Both nations in full dress uniform, comical marching and high stepping, and something that resembles a war dance. All of this cheered on by hundreds of nationals from each side chanting their own versions of fervour. This really is an experience that cannot be missed if you make it to this part of the world. 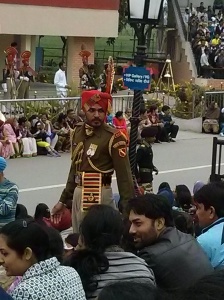 The average Indian we have encountered thus far, all over the country is around five foot six, at the border there was nobody under 6 foot 4. Add to this the big head dress and the attempted psyche out is complete. Sadly the same applied on the other side of the border and every Indian or Pakistani with any sort of height has been hoodwinked into the army and is stationed on one side or the other.

The golden temple is one of the holiest places in the Sikh religion and is without a doubt the cleanest monument in all of India. There is a free restaurant attached where all can eat for free and those who can afford it leave a donation. The Sikhs are renowned for their hospitality and our experience was no different. 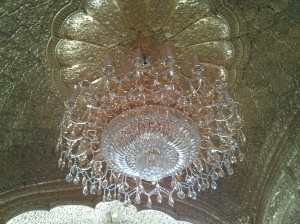 Amritsar is truly a lovely place to spend some time.

One thought on “Varanasi and Amritsar”