Ok…before we get too far into this it must be said up front that the lonely planet guide describes this place as only one for the “intrepid” traveller. Some may say that India is for the intrepid traveller. So if this place gets a special mention then god help us for what was to follow.

Our introduction was the usual onslaught by taxis and tuk tuks outside the railway station. We are getting pretty good at this so are well equipped for such chaos and the overcharging attempts. We know well before we get off the train, where our place is, how far away it is and we have an idea of what we should be paying per kilometre. 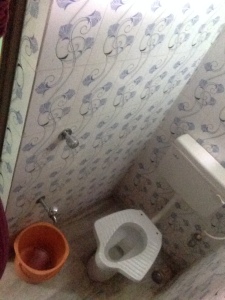 This joint started with a tuk tuk driver who started at a 500% overcharge and a 200% lie on how far away it was. When caught out in the lie he looked sheepish and came back with a better offer. We then advised him he was a lying swine and that because of that he would not receive one rupee of our money. We found another guy who witnessed this charade and headed for our hotel.

Our place was rated highly for Indians but would not get the same rating by western standards. We were given the flash room. The sheets were filthy, as was the bathroom sink, no toilet paper, no toilet seat, no ass gun (a fantastic invention used widely around these parts), no shower, no soap, no towels, no hot water, footprints on the toilet and to cap it all off a floating turd in the bowl. Sadly it was still better than the joint near the airport in Calcutta.

Went for a 12-15 km hike to find the tourist bureau and a good feed…failed on both counts. Everywhere we passed the kitchen was an outdoor fire using a 44 gallon drum full of brown water for cooking, drinking and washing dishes. Now I am not afraid of street foods but really…there is a limit as to how far even I will go. Got home and negotiated with the owner for a car to take us around to a bunch of sights the next day starting at 10 am.

10 am came and we headed downstairs to find the owner and the driver in discussion over the route and destinations. Paid the agreed upon price and he ran through the list…this differed greatly from last night’s agreement. We fixed that bit and he tells us we will need to pay extra for parking at each spot…ok…he then asks if we want an ac car or a non ac car…ac obviously…500 extra…and it started.

I have been with Jill for over 13 years now and even I have not copped a tirade like this one. She started ripping in to this dodgy lying money grubbing owner like nothing you have ever seen. After 3 minutes the owner rolled over and agreed to everything as per last night…but Jill was venting…I grabbed back the money and called him a lying cheating bastard…but Jill was in the zone. Another minute later the driver scarpered…another minute and the cleaners were bolting…one more and the neighbours were gingerly peeking around the door to see what the commotion was…

By the end the owner was a whimpering mess in the corner saying “yes ma’am I am sorry” over and over. We got in the car and had a lovely day with a great driver having seen temples, caves and the zoo and all for the price that had been negotiated and agreed upon the day earlier. The only other drama was a shonk that tried to get money off Jill as a donation to see the free temple. Jill was on fire…not sure exactly what happened there… By the time I had taken 2 photos the dude was nowhere to be seen and no money had changed hands. 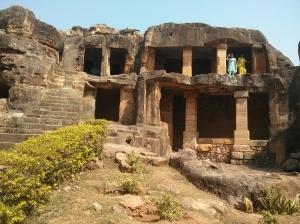 At the moment we are struggling with the dual nature of India. Most of the people are honest, genuine, caring and a pleasure to be around. However the bad experiences tend to stick in your mind more than the good ones. This country has an abundance of lying, cheating, rip off merchants, and a range of poor rubbish and toilet habits which destroys it for the others. 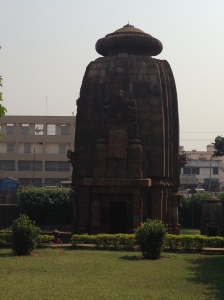 On out walk to the tourist office on the first day we walked past a group of kids playing cricket…they packed up the game and ran over to us cheering and yelling just to shake our hands and say hello…15 minutes later a woman who had just bought a meal from a street vendor saw Jill’s white face, hid her meal behind her back and begged for money.

I think that India may be breaking my bride. She has seen the benefits of breaking out the “Angry White Woman” and is doing it with ever increasing regularity. Added to this she has embraced the title of Ma’am and is referring to herself as such even while talking to me and often in the third person. Phrases like “Don’t annoy Ma’am” or “Ma’am is not happy” seem to be more regular and frequent. Lets hope a new location with less shonks brings her back.