Having left India we landed in Kunming in China’s south for Chinese New Year. The first thing we noticed was the cleanliness, the streets are 3-4 lanes wide, they are fully paved to the edge where they meet with a footpath, there is no litter and people are not urinating in the streets. I put us in a black list taxi that took us directly where we needed to be with no fuss and for the agreed upon price. 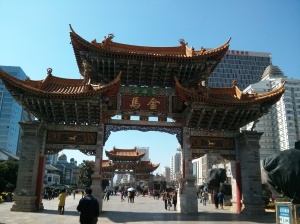 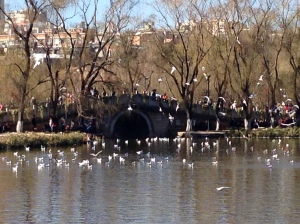 The hostel was neat clean and slotted us into a bed straight away. This allowed us to sleep off the fact that we had been awake for 44 of the previous 48 hrs (mostly due to the Kolkata hovel). A few hours nap, up for lunch, down for a nap, up for dinner, sleep overnight…the world is good again.

Hit the few tourist things that there was to do in Kunming, lake, pagodas, mosque etc…got photos. The most had conversation was us revelling in how clean China was and the inevitable response of…REALLY…from every westerner that we met. For all of the dirt in China, the spitting, the smog, the fires, the fossil fuels being burnt every 15 feet…it is spotless compared to India.

Our gastronomic enterprises were not deep fried or curried and surprisingly the chilli content was higher. There truly is something to be said for simple food well executed. A dumpling, some noodles with simple sauce, steamed vegetables with a touch of chilli or sauce. We are loving this break from the curries. There is a local delicacy called across the bridge noodles. This is a huge bowl of steaming broth and a range of raw ingredients that you quickly dump in the bowl in whatever proportions you wish, to cook. A few minutes on and tuck in. It is a great meal but a little bland. It benefits greatly from a dollop (or two) of the chilli that is on every Chinese table. 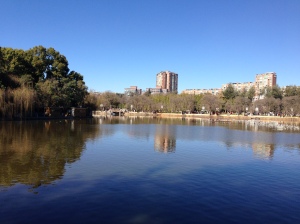 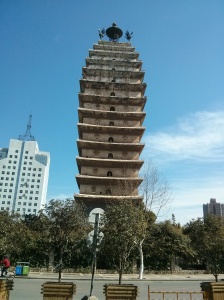 For those who have not experienced Chinese New year in China then suffice to say it is feral. It goes for weeks and up to a month in some places. We picked a small (ish) town so got the abridged version, but by all accounts Beijing and Shanghai are crazy. The fireworks start very early and finish very late every day. The daytime ones are generally set off by mischievous chefs who run out of the kitchen, stand around like giggling schoolgirls and let off massive bangs…scaring the life out of the waitresses…and then running back to the kitchens giggling madly.

We hooked up with a Brit and a Canadian who speak Chinese and along with a Melbourne girl we all headed out for Chinese New Year’s Eve. Having linguists meant we were not limited in our choice of venue and away we went. After a quite few drinks we left the hostel at 8pm in search of a meal…found a joint and ordered up a storm. We ate, drank, sang, got adopted by the staff…the owner heard we were there and came from his other restaurant to join us…armed with Baijiu (triple distilled rice wine). Anyway…well after 2 am we left after having had fantastic night. 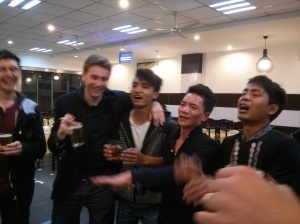 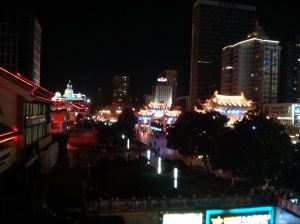