Well I have found my range in India…expect it all to be totally messed up and on occasion you may be pleasantly surprised. We headed out for the HOHO bus that is due to hit each site every half hour…after waiting over an hour we rang the number and were told “yes five minutes”…20 minutes and about three of Richards finest tirades later we abandoned all hope of the bus and headed for the metro to get to the red fort. On the way the phone dude rang jill to tell me my SIM card had been activated and was ready for collection but not for another hour. So after standing on the street corner outside the Nehru museum for 90 mins I had another 60 mins to kill before I could get my phone connected.

We started towards the phone dude but stopped at Indira Gandhi’s house which had been turned into a memorial as it was the site of her assassination. Then off to get the SIM card. Now in Australia we believe (or at least I did) that in a telecommunications sense India is well advanced, and while all else may not be right the comms would be good. So I was quite surprised to find that they had never seen the iPhone 5 and there was no such thing as a nano SIM card to fit it. I watched the dude take to the SIM card with scissors and a nail file for about 15 minutes before deciding I did not want his bodged up job jammed into my phone, never to be able to be retrieved, thereby wrecking both the sim and my phone.

I told him to forget it and that I would once again forego connectivity. At this point he advised me that the SIM card had 250 rupees of credit transferred to it which I owed him money for. I was about to launch into my 5th or 6th tirade of the morning…shut up…paid him the $4-5 and walked away.

On the positive side I have mastered the local tuk tuks and am saving myself much walking in the doing so. Tuk tuk to the metro, metro to the red fort a fort built in the 1y600s out of red sandstone and the site where the indian flag was raised for the first time after independence in 1947)….and a great afternoon had by all from that point on. 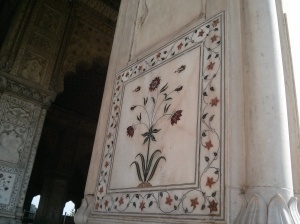 The next day we had a cruisy day where I got to fulfil a long held wish of mine. Many years ago my father relayed to me a story where he had a shave from an Indian barber, and he did not have to shave for days afterwards as the man had grabbed and contorted the skin so as to cut off the beard 2 inches underneath the skin. Many years ago I tried it in Australia at a chain hairdressers by the apprentice hairdresser who was the girlfriend of a mate… and it was…surprisingly.. an unmitigated disaster.

We saw a by the road barber and I stopped in for a haircut and a cut-throat razor shave. At the end when I asked for the bill he answered “as you like”. These are frightening words that you hear quite often here in India, as I am certain that I will pay well over the going local rate but the theory is that you pay what you believe that the service was worth. So I ended up paying around 10 times the going rate (I asked when I got back). But this was still about one third of the Australian price for a haircut alone and I was happy. This was not of the calibre of shave my father received but the experience was great. Bottom line is that if I had been really tight I could have had a shave and a haircut and have had change from a dollar. Either way, I left clipped and happy.

We had our first Indian train journey as we did the New Delhi to Agra run. It is about 200 Kms and was to take us about two and a half hours on the super fast train. Five hours later we arrived. As a final parting shot at me for my many tirades New Delhi threw one last curve ball at me before leaving. As we got in the tuk tuk to head to the station we got a flat tyre…while transferring to another tuk tuk I stepped off the gutter to load my bag…foot hit uneven ground…ripped my ankle to shreds… Twisted, swollen and throbbing ankle…

New Delhi and I will never be friends.