Xian has a bunch of stuff worthy of checking out and as tourists we are obliged to do so. It is quite strange really that in both Brisbane and Canberra where we lived for extended periods we never really hit any of the tourist things but are now doing everything that exists. This started with the major attractions but has spilled down to the the little ones now too. Possibly best highlighted by our trip to the ‘Giant wild goose pagoda’ a fairly impressive structure south of the city walls. Essentially this was yet another monument that Jill decided that we needed to climb so we schlepped it up endless flights of stairs.

The walk back from the various pagodas was fascinating. We got hopelessly lost in the back streets of Xian and found ourselves wandering the streets in the local market and commerce districts. They tend to group their services in blocks here so we wandered past 10-15 shops specialising in a particular thing before moving on to the next thing. There does not seem to be much of a pattern to how these things are grouped but it was kinda cool the way it all works out. Ten shops selling crabs is followed by ten selling bicycles, followed by fish tanks, followed by pet stores and so on.

And then we happened upon the fabric district which was a series of massive markets of material which were accompanied by curtain makers and then tailors once again all in blocks. As we popped out of this area we found ourselves back at the city walls. Three days later we hired a tandem bicycle and did the bike ride all around the city walls which is about a 90 minute ride on a cobblestone wall, which for two people who have never really been cyclists, had an adverse effect on our dainty little backsides and we are a touch tender. Jill was behind be on the tandem bicycle and she swears that she pedalled the whole way but the giggles at various times throughout the trip suggested that she was amused by my efforts while she was given a ride (I cannot prove this, and she denies it but all the other people who had the girls on the back that we passed saw the guy pedalling and the women doing everything else but. One woman was eating ice cream while old mate in the front worked his ring out going up a hill).

Minor attractions aside, the main reason for coming to Xian is its proximity to the Terracotta warriors which we did on the Friday 1 November. They are about a 90 minute bus ride out of Xian and with an English speaking guide it is a fascinating trip. The site is split into three main pits and they started us off at the worst of the three, then the middle one, then at pit 1 which is the main one and is impressive by anybody’s reckoning. An interesting part to the story (that was unknown to me) is the fact that physicians at the time believed that mercury had curative properties and were dosing the emperor on a daily basis. It truly is amazing what can be achieved when an insane megalomaniac subjugates his people and enforces personal whims. Needless to say he thought that creating the warriors was a good idea and he died fairly young.

There is a mound of dirt around the corner from the warriors that they believe to be the tomb of the emperor due to the heightened mercury levels that have leeched into the soil and the feng shui associated with the area. According to the guide, the technology does not currently exist to access and excavate the tomb and everyone believes that it will be in pristine condition when it is finally accessed (not expected to occur for another 50 or so years). Having seen both Indiana Jones and Lara Croft I am sure that we could do it today but they apparently wish to preserve it rather than being chased by large boulders. Perhaps the Chinese are not as adept with a whip as Harrison Ford.

Today we went hunting to the Bell and drum towers along with the city god temple and the great mosque. These were all items highlighted in the centre of our tourist map as major attractions. Granted the bell and drum towers were pretty good but in the centre of town they were dwarfed and eclipsed by shopping malls on all sides. On the up side it saved me having to climb yet another attraction. The city god temple (believe it or not) was the name of one of the big shopping centres. And the great mosque was buried in the midst of the bazaar stalls in the Muslim quarter. We had actually already walked past it three times without noticing its existence.

The highlight of the day was the visit to the bird market. What started as a market for pet birds and their accessories has exploded into any item you could possibly imagine. The extension to other pets such as reptiles, fish, turtles and squirrels was fairly obvious as was the usual phone, food and clothing stalls. I must admit that the street dentist threw me. There was a chair set up on the side of the market and a table full of dentures in front as he got to work on some lady seated in the chair. 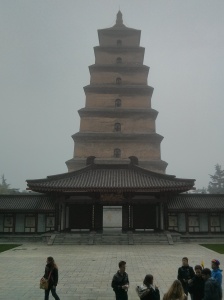 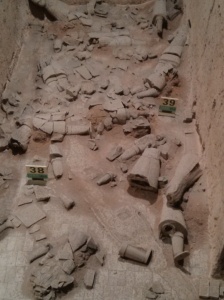 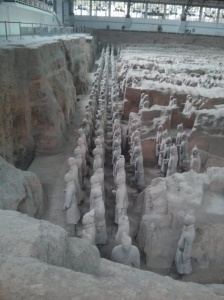 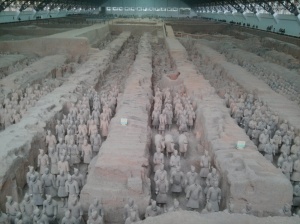 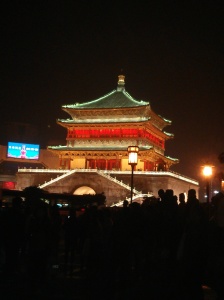