I must say this beauty is named appropriately.

We started our morning at about 7am with an included breakfast followed by a bus ride to the wall. There were 3 options available as a tour from Beijing and we chose the Mutianyu section that is possibly the most famous and the one where most of the Great Wall photos are taken from. Upon arrival you are greeted with paying a further 80 yuan to take the chairlift to the wall otherwise you have a 40 minute and 2000 step hike just to get to the wall. We paid the extra 80 and thank god that we did.

As you get to the wall the Mutianyu section is about 8kms long which seems perfectly reasonable on the face of it. You enter from the chairlift at gate 6 and can either:

1. Go right to gate 1 which is the end of the renovated section and has the original wall in its un-renovated state

2. Go to the left and wander the relatively flat beautifully renovated sections through until gate 23

We went right. I am perfectly comfortable at this point in reiterating a point from an earlier post. You need to be fit to do this. The trip to the right was best suited for mountain goats as it reached almost vertical sections and we found ourselves stopping every 20-25 meters as our lungs, thighs and calves were burning. Gate 6 to 5 goes down to a valley and then 5 to 1 starts climbing up the other side of the mountain until it reaches the next summit. Despite this an hour later we had made it from gate 6 to gate 1 and started the wander across the top of the mountain range on the old section which was level and a welcome change.

We returned to gate 6 which took less time as the return was mainly down the steps and we mused at the people doing the bit that we had just finished. People seemed to be dying in the 5-4 section and they (like us an hour earlier) had no clue that each section got progressively steeper. Upon reaching gate 6 we thought we would do the wander left. While still a steep walk it was on a paved level surface which undulated and was comparatively serene. We ambled a few gates before returning to gate 6 for our return down the mountain and the included lunch.

The return had 2 options…you could do the chair lift or you could take the toboggan ride down the mountain.

The toboggan was incredible, The only detracting point was that you had to slow down due to a wowser in front who rode the brakes all the way down. You get on and push the brake forward for speed and pull back to slow. We had a group in front and we waited as long as was reasonable, without holding up the whole line too much, so that I had a good section of free track in front of me. I jumped on and pushed the handle forward. Chewing up track rapidly I was having a ball and the laughter from the sled behind me indicated that Jill was too.

Then it ended. Some idiot had let their 8 year old daughter (or there abouts) ride alone and she sat on the brakes. At the speed I was going I had to slam on the brakes so as not to plow into the person in front of me. Now is probably a great time to mention that OH&S in China is not what it is in Australia and you would never get away with such a thing back home. Anyway I slammed on the brakes and stopped before rear ending the person in front and immediately became concerned as to whether Jill would see the sudden stop in time to avoid rear ending me. She did. Needless to say there was a queue of about 20 stuck behind the 8 year old and we all stopped dead hoping to put some track between us so that we could move again.

It freed up after a pause but alas we caught her quickly enough and we got on the brakes hard again. Jill did not notice as quickly this time and I got off the toboggan with her boot prints on my back. No major damage done. A quick meal at a local joint which saw us both stuffed with food and 1.2 litres of beer with change from $20. I found the local bakery option the night before on the walk back from Ghost street and am now addicted. We stopped and grabbed 2 custard tarts, 4 chocolate and 4 vanilla biscuits and something that resembles a vanilla slice (but not too sweet) for about a buck. 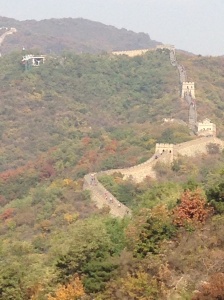