Leaving Pingyao we had a long but relatively uneventful transit to Qingdao. This was a nice change after a few nightmare transits lately. It was a 6am departure to the train, a couple of hour train journey on another overpacked train, taxi transfer to the airport, a flight to the home of Chinese beer, a bus ride and hike to our accommodation arriving about 12 hours later. Apart from an over zealous security woman at the airport the trip was calm. No baggage dramas, one minor incident of the woman next to me vomiting all over the floor of the train but it was as we were leaving so no real damage done.

We arrived at our accommodation at after 6 pm in 32 degree heat…the hostel was atop a hill at the old observatory which had been converted to a hostel. The roof was the restaurant and we found out it was pasta party night. This meant for $10 a head you could have all the pasta, salads, cold dishes…and beer…that you could eat and drink. Hot, sweaty, and tired we dumped our gear and headed to the roof. We settled into a couch, enjoyed the breeze atop the hill, sipped a refreshing ale (or two) and was fed a credible Chinese attempt at a bolognese pasta. 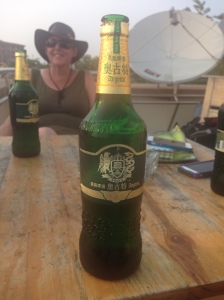 Qingdao was voted one of China’s most liveable cities in 2012…in 2014 I think that the smog and pollution may actually outdo Beijing. It is a coastal town so the sea breezes may effect the smog levels but on our arrival from atop the hill you could certainly not see the bay and could barely make out high rise buildings within close proximity. We actually spent 4 nights here and got a vaguely smoggy day on one of the days where you could see a grey looking bay…as opposed to the extremely smoggy days where you could see nothing. 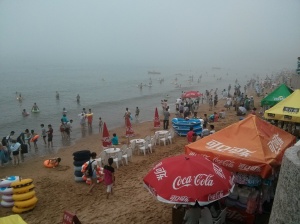 We went on our usual hike around town…on a 37 degree day…with 90+% humidity. Stopped at the train station at noon to get our tickets out of town and slowly melted into the floor of the railway station. As we passed the church we came across a bunch of Chinese brides being photographed in western wedding garb. They were everywhere. We stood in one spot in the square and started counting…by the time we left the number was over 30… on a 37 degree smoggy day.  Based on this trek around town it became clear that the usual efficiency of Chinese cities did not exist here in Qingdao. The pieces were there but they did not connect together like they normally do in other Chinese cities.

While hiking around Jill took photos of high-rises from street level and was unable to get a view of anything above the 5th floor. After this we hopped the bus and went to “beer street”…in beer street is the Tsing Tao beer museum and a street full of restaurants with large beer kegs everywhere you look. We went through the museum and then settled into a bar across the street for a sip and a bite to eat. 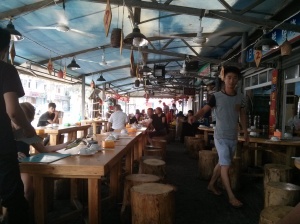 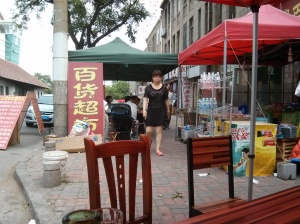 We hooked up with Molly the Chicago nanny who is training to be a nurse who was struggling her way through ordering from a Chinese menu so she joined us. Hours later after not being able to get a cab home, she came back to the hostel and waited for her nannying boss to come and pick her up. While we waited we sat on the roof of the hostel having beers until her boss arrived and also joined us on the roof for beer. 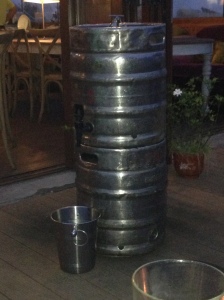 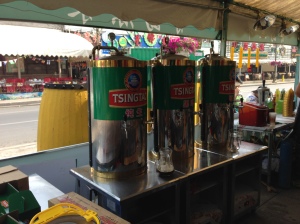 While it was pasta night on arrival…there was a different food option each night of the week…we skipped paella night and ate dumplings at one of the local restaurants instead…after our beer museum day we found it was burger night and our last night was rib night. Quite frankly $10 a head for all you can eat and drink was just too good to turn down…the fact that the food was of pretty good quality just made for easy decision making. 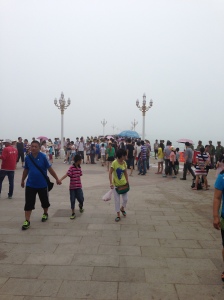 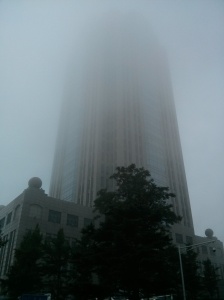 Qingdao was an hot, humid, obscenely polluted city that was shrouded in smog and mist almost the whole time we were there. We headed down to the pier at noon and had about 20 meters visibility…so much so that you could not see the water until you were almost on top of it. We were told by locals that this time of year is particularly bad but that at other times the sky is crystal clear…I will have to take their word for this…as our experience was that of a dirty, polluted city whose infrastructure was not coping with the population.