Thank god for Hyderabad…our departing India was lass than auspicious, Kolkata was passable and Bhubaneswar was the worst place on the planet (that we have been to so far). We were seriously reconsidering our next 4-5 weeks finishing off north Eastern India and were thinking of bailing on India entirely.

But along came Hyderabad in the state of and Andhra Pradesh. This is a city that gets it. It is trying. It sees the errors made elsewhere and is actively trying to address them. An intersection has one police officer (rather than 10-15) and he is working (rather than talking or sleeping) as such traffic flows and wrongdoers get punished. The city employs cleaners and provides rubbish bins at semi-regular intervals) and has fines for those who litter. As such the streets are (relatively) clean. 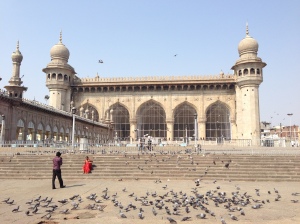 The waterways have dredges digging out the submerged rubbish of a bygone era. They have nets catching and corralling the new trash additions. The transport department has inspectors pulling over drivers and checking exhaust emissions. All of these things are VERY positive signs of a city that is learning from the mistakes around them. Despite this there is a long way to go but you truly must applaud the intent.

The first day saw us checking-in to a lovely hotel closely followed by Jill’s mandatory exploration expedition. This involved many kilometres of walking (normally around 12-15 but these numbers are in dispute) and exhaustion. This trip was made worst by Jill’s sniffles that delivered to her a blocked nose. Hence the idea of wandering along the lakeside was wonderful to her and saw me literally dry retching at one point (Hyderabad is better but not 100%). 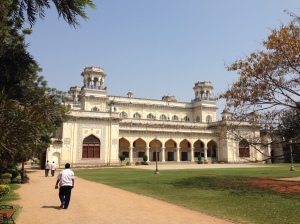 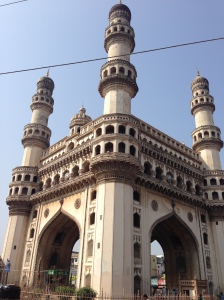 The next day we hired a driver through the tourist office who took us (in air conditioned comfort) to most of the big sites in town. We hit the Chowmahalla palace, the Laad bazaar, the Golconda fort, Charminar (city gate style thing built in the 1500’s), Mecca Masjid (big mosque), high court, Qutb Shahi tombs, Buddha statue, Hussain Sagar (pond) all in one day. Each one of these were quite wonderful and benefited from the city’s cleanliness policy.

We found many parks that were beautifully clean (only to find that they did not allow people into them). We saw a nice one and tried to enter but were told we had to leave our shoes at the gate (now let’s be serious…I spend my days watching Indians pissing and shitting everywhere and I wear thongs in the shower of my hotel…there is no way I am walking barefoot in an Indian open space). We did not enter but it looked nice. 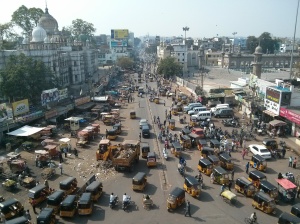 Our hotel was full vegetarian and alcohol free. Needless to say for a 3 night stay this proved challenging on both fronts. Jill found the Nilgrisi Kofta and the Haba Bara kebab which she loved and ordered every night along with some butter naan. I mixed it up but essentially a vego restaurant in India did not offer the steak in pepper sauce, washed down by a cold beer, that I was craving. I made do. 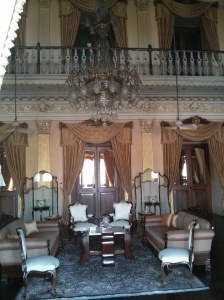 We had to check out at noon on our last day but our train did not leave until 9pm so we found ourselves with time to kill. So we headed to the Nehru zoological park (Zoo). This had little or no write up but was by far the best zoo we have seen with the exception of the Singapore night zoo. The range of animals was good (with all the big ticket items) the pens were spacious, clean and seemed habitat appropriate where needed. You got to be very close to the animals and mostly had unimpeded camera angles. All things considered…excellent.