We are well and truly off the beaten path now…English is virtually non existent and every little action is becoming more and more challenging. We checked into the best hotel that we have stayed in since leaving Australia when we arrived in Guiyang. Sadly it also had the worst wifi since we left too.

While the hotel was lovely there are a few elements that make it uniquely Chinese and a little odd to say the least. There does not seem to be any service elevator so guests share the elevator with staff going about their business. As we have noticed throughout China if you wait…you lose…so people push and shove to get onto buses, taxis, trains etc. that is just China and you get used to it…but when a cleaner races a guest to the lift and pushes door close so that the guest has to wait for the next lift well that is another story. And this goes for the laundry dudes filling the lifts while you stand waiting to use them, and the restaurant staff taking food to the kitchens etc. The service staff however do allow guests first use. 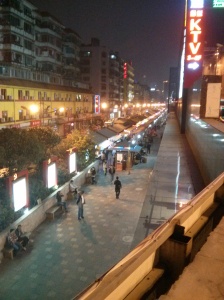 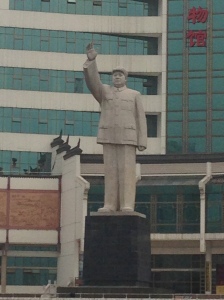 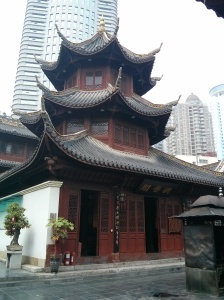 The hotel was right next to an amazing food street which we spent most of our time eating at. Great food, dirt cheap…the only trouble was getting access to coffee and ordering in a town with little or no English. The town is also home to one of the largest statues of Mao Zedong across the road from yet another stunning park and square (something China does like nowhere else).

We spent a day hiking around the 1000 acre park in the middle of town which was essentially a massive forested hilly area. Having schlepped it up most of the mountain Jill decided we could catch the cable car back (why we didn’t catch it up was apparently my fault)…so we started on a journey of stairs up the mountain. Half way up we met some locals who said there was nothing at the top. I stopped…Jill kept going…20 minutes later she returned regaling me of the beauty that was the mobile telecommunications repeater tower. 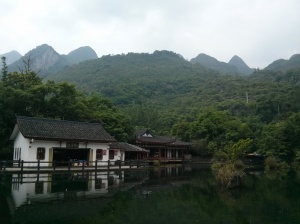 Next we headed for the town of Anshun which has even less English but is the launching point for the Longgong Dragon Caves and the Huangguoshu Waterfall which is the tallest in China. We looked at the caves and they are quite expensive and as tackily commercialised as a thing could be… so after some thought we decided to boycott the caves. We aimed to hit the waterfall and headed for the bus station…after much walking we failed. So we got our return train ticket to Guiyang extended by a day, hopped a local bus and headed for the inner city sights.

We made it to the lake and the Confucius temple…now most of you would know that I am an avid studier of the writings of Confucius and as such I sought to educate my wife by advising her of some of his better known teachings. This did not go well. I think things went wrong when I advised her that “Confucius say…man who go to bed with itchy bum…wake up with smelly finger”. 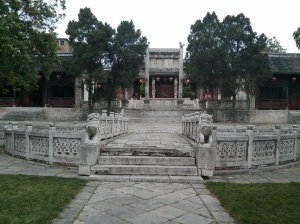 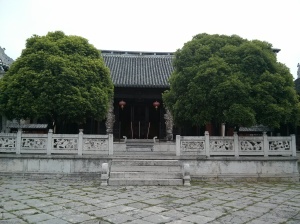 The next day came and we took another crack at getting to the falls… Success. About 5 bus rides, well over $100 in park fees etc, much gesturing and no food or drink…we made it to the falls. It must be said that our lack of Chinese is really proving to be a detriment as we get into the back blocks of China. 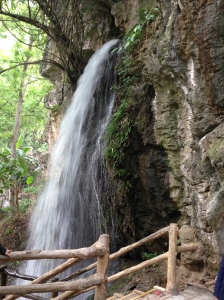 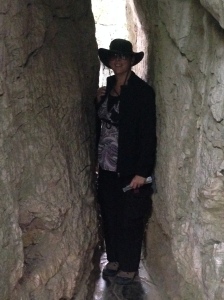 The area is actually a series of waterfalls with the Doupotang falls being the first that we hit and the Huangguoshu being the biggest. The area is similar to Guilin and Yangshou and is full of karsts (lumps for those who have been following). The falls were stunning…a great little walk that could be (and was) done that took you behind the falls into caves that had the wall of water cascading past you…very cool. 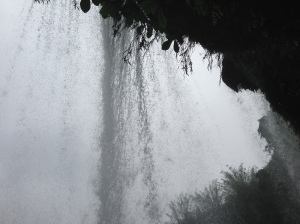 Similar to the stone forest near Kunming, there had been a bunch of drug affected geologists who were given naming privileges in the area. As such there were very grandiose names given to rock formations such as the “Stone of Evolutionary Spirit” and the “Nine Dragon Rock”…none of these things could be seen within the rock formations without the use of mind altering hallucinogens. But anyway that was their names. 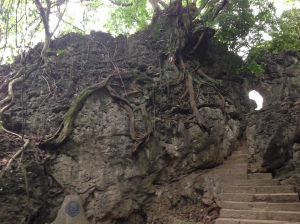 The journey to get to the waterfall was monumental…but the effort was well worth it. On the positive side…after hiking down several kilometres worth of stairs to get to the base of the waterfall and traverse in behind it in the caves with the water curtain…you find yourself at the bottom of a large mountain with the daunting task of hiking back up all of those stairs. But no…the Chinese have built a pair of extraordinarily long escalators which for about $6 will save you the pain of the climb…each escalator ride goes for about three minutes (time your next ride at a shopping centre for some perspective)…we paid. 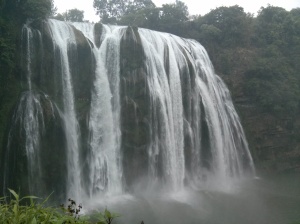 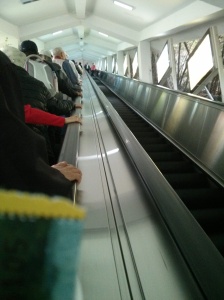 As there is a public holiday in early May in China we were killing a bit of time so as not to be in Chengdu (the global home of the Pandas) during the peak holiday time. So we headed back and had another couple of nights in Guiyang. Our hotel while odd, backed directly onto a shopping mall with the most amazing indoor aquarium in one of its central openings. About three storeys high and full of eels, rays, gropers, turtles etc. 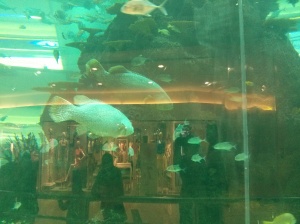 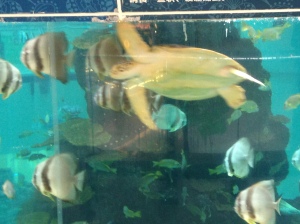