Mirissa and farewell to Sri Lanka

The thing I didn’t mention about Galle was the sea turtles…from atop the walls of the fort…at around sunset…the sea turtles come in to shore and feed in the shallow waters. We spent about 30 mins watching the turtles in the shallow waters near the fort wall. The next morning we hopped a tuk tuk and did the 30-40 kilometre schlepp to Mirissa our next port of call. Our ride was 30-40 Kms, plus driver, plus stops all for 2000 rupees…less than $20. 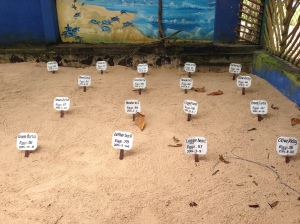 Along the way we stopped at the touristy bits…the first of these was the sea turtle hatchery which is a small place that rescues and saves both the eggs and the munty turtles. So there were a bunch of rescued munty turtles along with the eggs at had been liberated from the beaches (away from the poachers). We stopped at an inland lake, and a bit further on to get a photo of the traditional pole fishermen. It was staged for the tourists but hey…this was how it was once done. Needless to say that the seafood here is good, fresh, plentiful and cheap.

Our time in Mirissa was merely to be a beach holiday on the southern part of the Sri Lankan island…almost. The other gem that I have been holding back for the uninformed (like I was)…is that Sri Lanka has a whale migration similar to that which happens along the east coast of Australia. In Australia we get the humpback whales…in Sri Lanka they get the sperm whales and the blue whales. Now the blue whale is the largest animal known to ever inhabit our planet..including the dinosaurs. 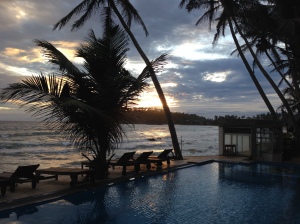 An average blue whale is (thanks wiki) about 30 metres long and weighs about 170 tonnes, which is around twice the length and 4 times the weight of the humpbacks we see back home on the east coast. Alas the blue whales do not put on the same sort of show as the humpbacks (jumping, leaping and fin swatting) but rather just cruise on past with the odd blowhole burst. The experience was not what I had initially hoped for but we did get to see a whale along with some dolphins and flying fish…which was a first for me. I was hoping for some awe inspiring photographs of the whales but the roughness of the seas and the brief glimpses of the whales meant that our cameras and ourselves were not up to the task.

The majority of time in Mirissa was spent lazing by the swimming pool trying to even out the tan lines on our feet from wearing sandal style footwear for so long. Jill’s feet had some strange tiger pattern going on while mine were blocked. The other thing was to use the salt water and sand as a natural loofa as we had both been in need of some general pedicure style maintenance. 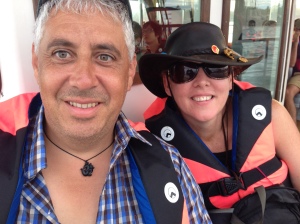 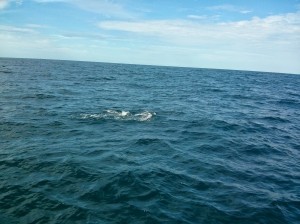 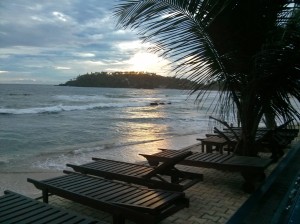 Mirissa was the last of Sri Lanka as we headed back to Colombo before flying out to start the Vietnamese leg of our journey. We would have a day and a bit and a catch up with Ruwan in Colombo but generally that was it. Jill did some prep work for her next assignment. Leaving Sri Lanka allowed us to witness possibly the greatest act of stupidity that we have seen since departing Australia, over 10 months ago. A small child (3-4 years old) was running around the departure lounge of the Colombo airport squealing furiously…ok…annoying but the kid is too young to really stop it…and the parents were trying to calm it down and shut it up…to no avail.

Enter stupidity…Dad was about to have a drink and the child threw a minor tantrum at wanting some…rather than say no they caved and I looked up to see a 3 year old swigging from a red bull can…fast forward 10 minutes… Any idea what red bull inside a brat 3 year old does. The entire airport lounge (and later the plane) was taken over by the shrieks, cries, tantrums and general bratdom of a kid who had been fed red bull and was buzzing off the walls on caffeine.

Thank god that Air Asia X offers a quiet zone for just a few dollars extra…this is just behind business class but is curtained off and children etc are not allowed. And my darling bride has booked us these seats for almost every leg to follow. This transit saw us leaving Colombo at 4pm and arriving in Kuala Lumpur at around 10 pm local time (but only 7 pm Colombo time) where we would crash in the airport hotel before catching an 11:15am flight to Ho Chi Minh City in Vietnam.

This meant we were trying to go to sleep at 8pm to try to catch 6 hrs sleep before being inside the airport once again. Anyway we woke tired and commuted through to Ho Chi Minh arriving there at around noon local time (with another time adjustment).

I had never previously considered Sri Lanka as a holiday destination but having been here…I will come back and would highly recommend it for anyone reading. This place is fantastic. The people are lovely, the food is great, you don’t have to fight all day haggling with tuk tuk drivers (or anyone else for that matter) trying to rip you off. The beaches are clean and the water is swimmable, the seafood is freshly magnificent and everything (that the government doesn’t control) is cheap. Our 4 days on the beach cost us about $35 a night for nice accommodation with breakfast included. The food and drink bill ran to about $65 for the whole time…this included 2 meals a day (breakfasts were included in accommodation), all drinks. And when you factor in that our meals were generally fresh fish and prawns, this is seriously good value.

The ability to see elephants and leopards in the wild, the conservation efforts and the rebuilding after years of warfare is truly encouraging. The natural scenery is stunning, and the attitude and friendliness of all you meet will amaze you. The only detractor is the facilities run by the government which seem hellbent on bilking the tourist out of every cent that they can.

Sri Lanka is definitely the jewel of South Asia and should be placed high on any list of places to be experienced. The war is over and the infrastructure is improving and this place will only get better. I hope that they keep their current trajectory of encouraging tourism without cheapening the experience. I would hate to see this turned into a tourist hell hole, because quite frankly the place is stunning as it is. While we did not make it there…the locals tell us that the beaches on the eastern side of the island are even more pristine and less crowded.

If that is the case…bring it on. 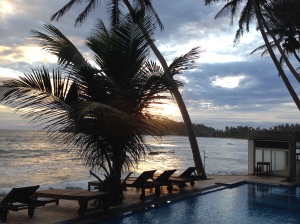 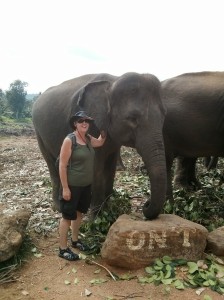