Once again the flight was spectacular. This part of the world is lined by tall, rocky, snow capped mountains with broad open plains on the other side. The plane flights tend to have one or other of these views in all of its glory depending on which side you sit.

Our introduction to Bishkek involved the usual haggling with black list taxis to try and get us to our destination, which was in the heart of town. All of this in Russian which of course we speak none of. Add to this the total inability to recognise the written language. The A’s mean A, the K means K as does M, O, and T…but that is where it ends. the B means V, H means N, P is R, C is S, Y is U…and then there is a bunch of random things. The 3 in the middle of the words (Z) threw me…as did the funky K which is mirror imaged on itself meaning Zh. Add to this the backwards N’s, R’s and the squiggle that is the D and we were struggling at first. After a couple of days we got a partial handle on things. Anyway these are the challenges of not being multi lingual and choosing to travel to foreign places.

We got our taxi which was a 1970’s vintage Russian bomb. The doors needed manhandling to open or close and the boot took about 9 slams before the latch caught. So off we went…the first sights were sheep, cows and donkeys grazing on the side of the road…being herded by men on horseback…OK. The trip was relatively uneventful until we hit the traffic of the city and were creeping along at a snail’s pace. At one point the exhaust fumes were pouring through the handbrake…filling the car with exhaust smoke. On the positive side we now know where old cars go to live out the rest of their lives…particularly Mercedes’. 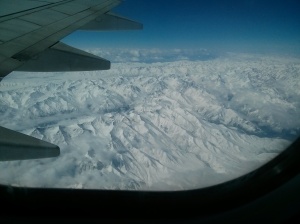 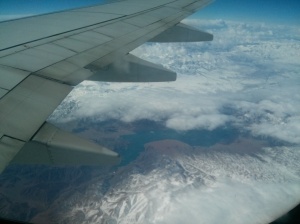 Bishkek is built on the plains alongside the mountain range and is flat and pretty. Our hotel is in the heart of town and is possibly one of the taller buildings around…at 4 storeys. Directly opposite was a fantastic café called Adriano’s which served good Italian espresso and had semi decent Wi-Fi. The main square was about a block away and bars and clubs were everywhere. We went for our usual wander around until we found the Pinta Pub and settled in for some local ales…followed by a few more a little later at the Black Rabbit. A couple of days later during another visit to the Pinta Pub we found that they served “Towers of Beer”. For those of you wondering a tower of beer is good.  By the time we had finished in Kyrgyzstan we had managed to sample the following local ales: Arpa, Jivor, Bavarskoe, Apna, Svejak, White Bear, Venskoe, Karagandinskoe, Shymkent, and Baltika beers. Oh and I cannot forget my personal favourite Zatecky Gus. 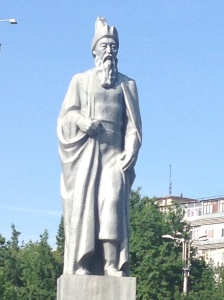 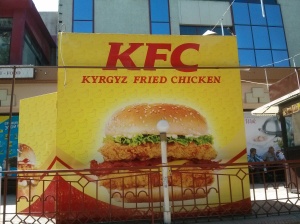 The hostel took us to the local ethnic village which had yurts (local traditional housing) and they introduced us to some of the traditional foods and drinks. We can now officially add horse meat to our list of eaten items we also had Shoro (a fermented yoghurt), Charlap (a fermented wheat drink), and Arlash (a mixture of the two above). They assured us that once you get used to it…it is quite nice…we are not used to it and it was disgusting . 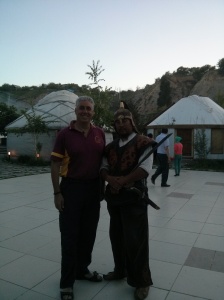 We made arrangements to go to the Alamein gorge, Sokuluk canyon and the Belogorka waterfall. Due to lack of numbers the Saturday trip fell through. But the Sunday trip to the canyon and waterfalls went ahead. Tourism is in its infancy here and is based around the natural beauty of the region. As such hiking and trekking seem to be the main go…with the odd horse riding thrown in. Having spent an entire trekking it is safe to say that trekking is not for me…but the sights were good. The main thing that this trip did for us was to introduce us to the fabled fat bottomed sheep. Having subsequently looked into this the fat tailed sheep make up about 25% of sheep in the world…but I had never seen anything like them and they were a 100% novelty to me. These sheep are highly prized and the fat deposits are extremely expensive but all I could think of was Kardashians. 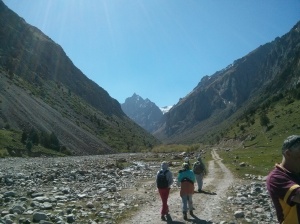 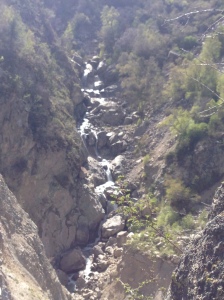 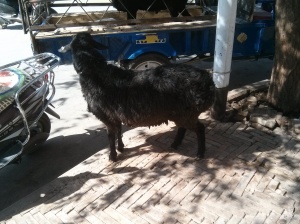 We met a Brit couple (Simon and Emily) in Urumqi who were heading in generally the same direction so we met up again in Bishkek for a traditional meal at one of the local restaurants and a tower of beer. Followed the next day (my birthday) by a group excursion to the Osh Bazaar. And more wanderings, tourist shopping and towers of beer. The highlight of the day was when Simon got pulled in by the (corrupt) police in the bazaar and was turned over for drugs (which they found none) in a poorly veiled attempt in a shakedown for bribe money from the obvious tourist. Given that neither he nor Emily had come down in the last shower of rain…they left with their wallets in tact.

The local dress in Kyrgyzstan for men at least is the Kyrgyz felt hat or Ak-kalpak…a tall thing that is worn daily by many and not just in a ceremonial sense. The other stand out feature is the abundance of gold teeth. I honestly did not think that such things still occurred however in this part of the world you are no one unless you have a gob full of glimmering chompers. They are everywhere.