Having left the minority areas we got back into China proper. Lanzhou is in Gansu province in the north west of China and is the province with the westernmost point of the Great Wall. We are getting close to having seen the majority of China and now have the northern strip and we plan on (generally) following the Great Wall to where it meets the ocean.

We have been in tiny cities for over a month now and I have really not been enjoying them. The prices for everything have been high, the services available have been poor and the English has been virtually nonexistent. We got into Lanzhou and found a night market around the corner where we could have 2 main meals with rice and the equivalent of 8 stubbies for under $15. There is still minorities and very little English but the food is great and cheap. 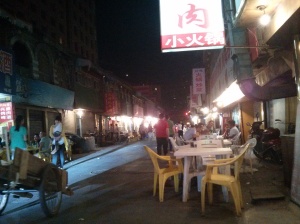 We headed to the museum and spent time checking out the Silk Road exhibition which was truly fascinating. Some very cool maps of the olden trade routes, and a great way to get your head around the spread of cultures and civilisation. Then off on the cable car up the mountain for some aerial shots and a look at the pagodas etc. the cable car sets off from the banks of the (very inappropriately named) yellow river… it is interesting to see what passes for a beach in China.

Jiayuguan is the westernmost fort of the Great Wall of China and is at the end of a torturous 8 hr train ride from Lanzhou. But the key attractions are the Jiayuguan Fort, the Overhanging Wall, and the First Beacon which are all a simple 1 yuan (18 cent)bus ride from town and a taxi. The place had been renovated to within an inch of its life and was obscenely fake. This is a typically Chinese phenomena whereby a renovation puts in things that were never there or leaves out bits that were meant to be there…our first exposure to this was on the three gorges tour but it is a common theme throughout China.

The absolute kicker to the fakeness was the installation of a jousting field into the fort and a concrete camel caravan running alongside the renovated wall of the overhanging section. There were sections where the old part of the wall could be seen and it was really interesting. The fort and wall is adjacent to the Gobi Desert so you could photograph from the newly renovated wall across the Gobi desert which in itself is pretty cool. Alas on the other side of the wall was the hire of camel rides (actual camels…not the concrete versions) and quad bikes…so you could belt around the desert making obscene amounts of noise and tearing up the natural environment. 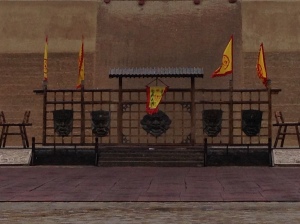 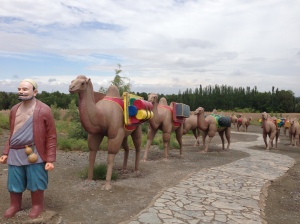 If you can ignore the added bits the place is quite stunning…the original wall was fascinating, the renovation had it been done authentically would have been great the only real detractor was the out of context additions which are clearly just grabs for the tourist dollar. Whilst walking around you could see the construction going on to build additional elements such as pagodas and temples etc. I am glad we came when we did as I have a fear that in 5-10 years time this place will more closely resemble a theme park. 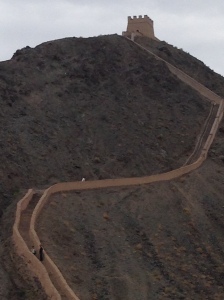 On a positive note…as part of the admission fee there is the Great Wall Museum which is fantastic. It does not have the usual nationalistic rhetoric but rather has the facts of the great wall, its construction, make up, fortifications etc. The museum was the best part. The next best thing was the photographs lining the path towards the Fort. There was a strip of about 100 metres that contained historical and current photographs of the same sections of the great wall. Some of these had been renovated, some had remained untouched. Some of the renovations had been done in line with what was originally there while others included the “additions” such as were found in the Fort. 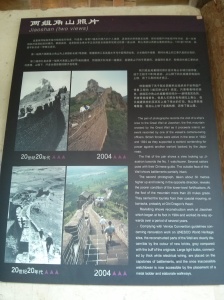 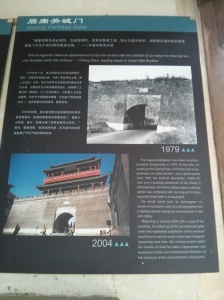 Some of the photos and artists drawings dated right back to the 1800s while others were just the more recent (2004 to 2007) history photos. But any way you look at it these photos of what it once was, were without a doubt the highlight of an enjoyable if not a little contrived day.