So our last couple of days in Beijing were spent nursing our cooties and wandering the streets in search of Hong Kong Sevens Rugby tickets. A successful trip even if it did cost us cash and about 7 hrs of walking. We found a family sedan that seems perfect for the growing Mellis Clan. It has 4 doors, great fuel economy and seems perfect for Scotty and his growing tribe (see photo). 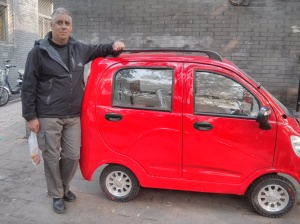 We had our first lucky dip meal failure of the trip when we lobbed at a joint and pointed at random dishes. Alas we were met with a chilli Prawn dish that had more Habanero chillies than prawns and our sides to be put into the steaming broth ended up as seaweed that was the texture of polystyrene foam and iceberg lettuce. On the up side, Jill has been steadily acquiring an ever increasing tolerance for chilli.

We had an overnight sleeper car on the train from Beijing to Xian (a first for me). Managing the local regional train network proved almost as easy as the city metro however seemed much more daunting due to the sheer volume of people. The train ride was 13hrs overnight and we left at 8pm arriving at 9am. We got off the train and were waiting for our lift from the hostel, when I was set upon by the only (partially) english speaking drunk man at the train station. Clutching his beer and rambling incoherently, I instantly became his friend.

We checked in and immediately headed for the Muslim Quarter of Xian for a meal. This is one part of the world that everyone should see at least once. It was a 100%  assault on every one of your senses with so much crammed into such a relatively small space that you were in total awe of what was going on. We watched cooks pressing noodles using what looked like a set of bellows with a mincer on the end pushing the noodles into a boiling vat (we plan to go back so I will try and post a video). The meat on a stick men were everywhere and the pure cacophony of actions was astounding.

We found deli’s, bakeries, restaurants and shops full of items that we had no idea what they were. After our lucky dip menu excursions and our willingness to try lots of different things, this place took it to another level. There was a fight (physical with many punches thrown), hawkers, touts…this place had it all going on.

We settled on a venue for lunch in the Muslim quarter and Jill made her first major blunder of the trip when she ordered beer with her meal. We ordered a couple of different versions of a beef soup sort of thing with some chilli squid on sticks. Shortly following this we hit our first CRITICAL INCIDENT of our trip and I have determined that we need some form of codeword to emphasise the criticality of an incident.

About 40mins after my meal I found myself in need of the amenities. Upon conveying this need, Jill at this point decided to stop on the side of the road and discuss the manner and type of facilities that would be available rather than actually take any step towards a venue of relief. I entered into a Zen-like state of concentration while trying to maintain an olympic pace back to the Hostel. While on my power walk, I was set upon by a turkish hawker who walked next to me for an extended period offering to sell me every item available. I tried to maintain focus and pace while I was offered sex with prostitutes and tried to deflect by pointing to Jill, who was in the meantime wandering aimlessly 20 meters behind me and was holding the key to get into the hostel for hostage, while every element of my being was screaming.

We got there and the world was good again. We have booked our trip to the terracotta warriors for Friday (it is Wednesday today) and will spend the day tomorrow trekking about Xian. We have 5 days here than on to ChongQing where we will take a 4 night cruise of the Yangtze River and the three gorges.